If you get your news from a certain Twitter account, you might think that Ford’s stunning announcement that it’s abandoning plans to build a $1.6-billion assembly plant in Mexico is a clear-cut victory for President-elect Trump’s campaign to force large U.S. companies to make their products on U.S. soil. 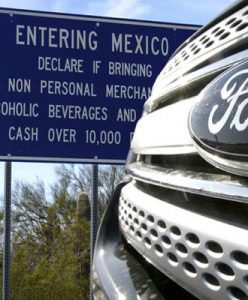 At first glance, it sure seemed like a one-punch knockout. Trump publicly shamed the automaker for months on its plans to make Ford Focus subcompacts in a new plant south of the border. He waved a gigantic stick—the threat of imposing a new 35-percent tariff on cars made in Mexico by automakers and sold in the U.S.—from his bully pulpit, which on Jan. 20 gets the presidential seal affixed to it.

Ford fed the meme of capitulation to the incoming president, throwing in the towel by notifying Trump in advance of its public announcement this week that the new plant in Mexico has been canceled. The president-elect—who, whenever an opponent signals weakness, has an uncanny ability to move in for the kill faster than a cheetah chasing a gazelle—has now turned his fire on General Motors. Regarding GM’s ongoing production of Chevy Cruze subcompacts in Mexico, Trump told the No. 1 U.S. auto giant: “esto es inaceptable.”

Okay, we’re having a bit of fun here. Trump didn’t say it in Spanish (and we can’t say for certain he thinks the car was named after Ted Cruz), but the president-elect ominously aimed his 35-percent tariff bat at GM’s noggin, calling his next shot like Babe Ruth in the 1932 World Series. [Editor’s Note: as this was being written, Trump also warned Toyota against building a new plant in Mexico to make Corolla models for the U.S. market.]

We hate to spoil the comic-book simplicity of winners and losers now scrolling on Twitter, but the complexities of manufacturing decisions in a global marketplace can’t be explained in 140 characters or less. Trade policies are a factor in these decisions, but so are labor costs, global competition, supply chains, profitability and how many consumers are buying your product.

A closer look at Ford’s decision to cancel the new plant in Mexico reveals that it was not a clear-cut victory for U.S. manufacturing. And if you really take the time to digest the implications of Trump’s emerging trade policy—rather than gulp it down in sound bites—a grumbling sound in your stomach may alert your brain to a potential chain reaction of unintended consequences.

Deploying a bit of public relations sleight-of-hand, Ford shrewdly combined its announcement shelving the new plant in Mexico with news that it’s adding 700 jobs to its production facility in Flat Rock, MI. Casual news readers will be forgiven if a glance at the headlines left them with the impression that Ford is moving jobs from Mexico back to the U.S., but that’s not the case. The expansion in Michigan has nothing to do with the Ford Focus subcompact: it’s to accommodate the production of a new electric version of Ford’s Mustang muscle car.

But if you got past the first 140 characters in Ford’s release and proceeded to follow-up news reports, like the story published Wednesday in The New York Times, you’ll discover that Ford’s decision to cancel the new assembly plant in Mexico may actually result in the automaker shifting jobs currently in Michigan to—wait for it—Mexico.

The Focus subcompact currently is built in Michigan, but both Ford and GM have experienced difficulty in squeezing profits out of mini-cars while covering the higher labor costs associated with U.S. auto manufacturing (the average assembly-line worker’s wage in the U.S. is $29/hour; Mexican auto workers earn about $10/hour). According to the Times report, Ford’s decision to cancel the new assembly plant in Mexico most likely means its Focus production line will be moved from Michigan to an existing Ford plant in Mexico.

Ford said market conditions that have depressed small-car sales were the primary factor in its decision to scrub the new Focus plant in Mexico. Which brings into focus (okay, we couldn’t resist) the bigger picture regarding cross-border manufacturing decisions.

As anyone who’s haggled with a car dealer over the price of a sub-compact vehicle knows, the profit margins on these mini-cars are microscopic; the dealer doesn’t have much room to maneuver, pricewise. A consumer might be able to get a dealer to shave $1,000 off the sticker price of one of the new electric Mustangs (which probably will list for around $40k), but good luck getting a bagful of nickels off the tab for a Focus or a Cruze. And here’s where the rubber meets the road in terms of unintended consequences: if Ford and GM can’t make money producing subcompacts in the U.S.—and they don’t want to challenge the barriers to foreign production Trump is threatening to erect—they may stop making these mini-cars altogether.

It’s important to remember that an assembly line is not the starting point for car-making; it’s literally the end of the line. First come the parts, which are produced by a cornucopia of suppliers, many of which are based in the U.S. It’s not a stretch to say that more jobs are at stake in the parts sector than on assembly lines (which increasingly are staffed by robots) when manufacturing location decisions are made, especially if a decision about where to build a car morphs into a decision on whether to build the model at all.

So what seemed like a clear-cut win is a bit more complicated when you look under the hood. And the implications of renegotiating or abandoning the North American Free Trade Agreement (NAFTA) will multiply these complexities a hundredfold. But since we’ve already exceeded 140 characters here, we’ll address that subject in a future post.

However, before Trump’s legion of 20 million Twitter followers invades our comments section, we’ll stipulate here that the huge carrot the president-elect also is waving—his promise to reduce the corporate tax rate to 15 percent—no doubt will have a large positive impact on U.S. manufacturing decisions moving forward.

So we’ll credit the guy in the bully pulpit with a T.K.O. on this round. And we’ve got him ahead on points in the big fight to bring manufacturing jobs back to the U.S.A., a fight we’d all like to see him win.