The hiring outlook for 2017 is the best the U.S. has seen in a decade, with 2 in 5 employers (40 percent) planning to hire full-time, permanent employees over the next 12 months, according to CareerBuilder’s annual job forecast. Three in 10 expect to hire part-time, permanent staff while half of all employers anticipate adding temporary or contract workers. 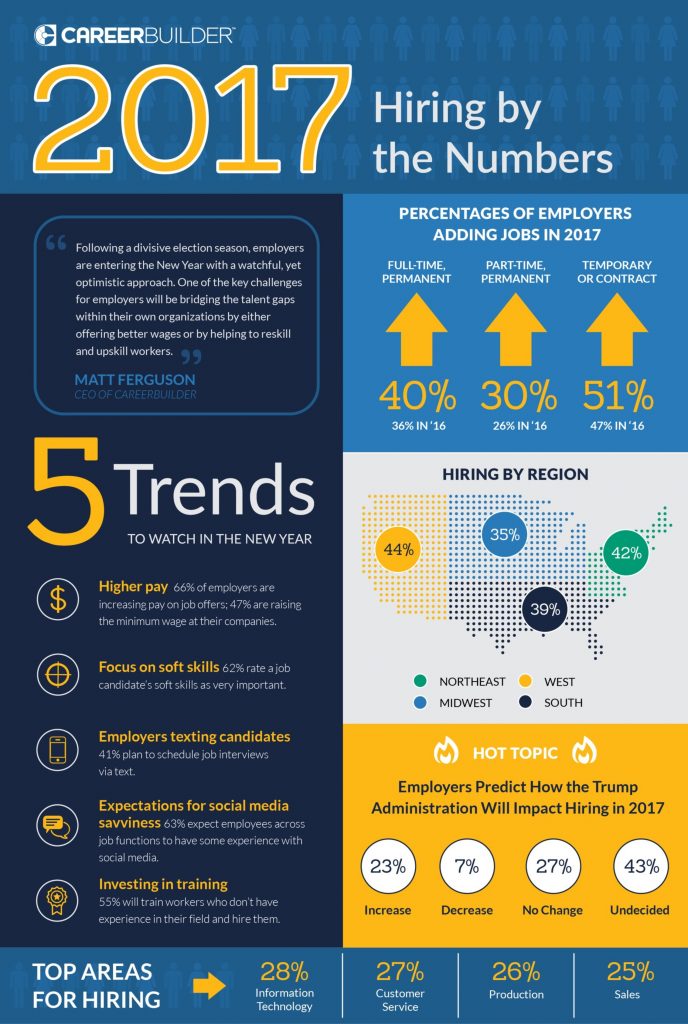 The national survey, conducted online by Harris Poll on behalf of CareerBuilder from November 16 to December 6, 2016, also indicates that employers will offer better wages, place emphasis on candidates’ soft skills and reach out to candidates via texts to invite them for job interviews. It included a representative sample of 2,391 hiring managers and human resources professionals across industries and company sizes.

“Three in four employers reported that they are in a better financial position than they were a year ago, which is instilling more confidence in adding people to their payrolls,” said Matt Ferguson, CEO of CareerBuilder and co-author of The Talent Equation. “Following a divisive election season, employers are entering the New Year with a watchful, yet optimistic approach. One of the key challenges for employers will be bridging the talent gaps within their own organizations by either offering better wages or by helping to reskill and upskill workers.”

When asked for their opinion on how the Trump administration will impact hiring in 2017, 23 percent of employers said the new administration would increase jobs while 27 anticipated no impact. Seven percent said they expect jobs to decrease while 43 percent were undecided.

The amount of employers planning to hire full-time, permanent staff in the New Year increased four percentage points from 36 percent in 2016 to 40 percent in 2017. Employers in information technology were the most likely to say they were adding new employees at 56 percent, a notable 12 percentage point gain over the prior year.

Eight percent of employers across industries expect a decline in staff levels in 2017, an improvement from 10 percent last year. Forty-four percent anticipated no change while 9 percent were unsure.

In terms of part-time employment, 30 percent of employers expect to increase their number of part-time, permanent employees in 2017, up from 26 percent last year.

Five Trends to Watch in the New Year

Among key hiring trends for the coming year are: