Home » Economic Development » The Editor's Blog » The Art of the Deal

By brokering a deal to keep in Indiana about half of the jobs Carrier Corp. was planning to move to Mexico, President-elect Donald Trump has put down a marker that he will indeed use the president’s bully pulpit to lean on American manufacturers who announce plans to move jobs out of the United States. 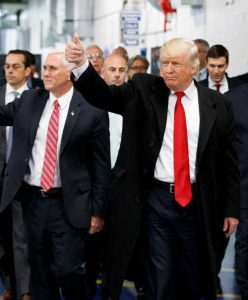 In an interview with The New York Times following a triumphant walk-through of the Carrier factory floor yesterday in Indianapolis (accompanied by Vice President-elect Mike Pence, who is still the incumbent governor of Indiana), Trump doubled down on his campaign promise to wield the big stick of steep tariffs on any U.S. company that tries to offshore its production.

“This is the way it’s going to be,” Trump declared. “Corporate America is going to have to understand that we have to take care of our workers also.”

But the centerpiece of the deal Trump engineered with Carrier is a bushel of juicy carrots for the HVAC manufacturer. Carrier will receive $5 million in tax credits over 10 years in exchange for keeping 1,069 jobs (with an average wage of $31/hour) at the Indy plant, which makes gas furnaces. The company also will receive $1 million in training grants and up to $1 million in additional tax credits based on Carrier’s agreement to invest $16 million in the plant, which is located on the west side of Indiana’s capital.

Despite this largesse, Carrier still plans to lay off 400 workers at the Indy plant and another 700 workers at a related company in Huntington, IN, and may move these jobs out of the country.

While we can all applaud without reservation Trump’s success in saving at least half the jobs at Carrier’s Indy facilities, any suggestion that this deal is a tour de force affirmation of Trump’s legendary deal-making skills should be tempered by two obvious advantages the president-elect had in his negotiations with Carrier:

First, as governor of Indiana, Mike Pence also is the Chairman of the Board of the Indiana Economic Development Corp., the public-private partnership that doles out economic development incentives in the state. As vice president-elect, Mike Pence has a new boss, Donald Trump. Ipso facto, Pence the governor (who a few months back offered a smaller incentives package to Carrier which the company rejected) deferred to Pence the incoming veep when Trump ordered him to up the ante.

Second, Trump’s negotiating partner was Gregory Hayes, CEO of Carrier’s parent company, United Technologies Corp. (UTC). UTC is a major conglomerate currently holding about $6.7 billion in federal contracts from the Department of Defense. Some pundits have suggested that Trump threatened to slash UTC’s military business if Hayes didn’t agree to the Carrier deal, but we don’t think it went down that way. Much more likely is that the president-elect, sporting a Santa Claus-red Trump tie made in China, casually hinted that his plans to “rebuild” America’s “depleted” armed forces would involve some huge increases in defense outlays. Defense outlays, as in billions of federal dollars moving into the already bulging pockets of major defense contractors like UTC.

Since we’re talking about the Hoosier State here, we’ll use a basketball metaphor to evaluate Trump’s quick score at Carrier: an easy lay-up, not the 3-point buzzer-beater from the mid-court line that anchored the narrative of Trump’s made-for-TV victory tour. But since it’s the holiday season, let’s not quibble over optics. Trump kept his promise and hundreds of American workers will keep their jobs. Bravo, Mr. President-elect.

Trump’s incursion into state economic development deal-making has added fuel to an ongoing debate about the use of tax credits for job retention; it’s also sparked a national discussion of the appropriate role a president can play in influencing corporate business decisions.

Regarding the former, let’s stipulate that there’s nothing unusual about deploying tax credits to keep jobs from moving out of state; by any measure, the Carrier deal is a fairly modest package justified by the fact that it kept a significant number of jobs from moving out of the country. When aerospace giant Boeing, in the midst of deadlocked union contract negotiations, threatened a couple of years ago to move its primary aircraft assembly facility out of Washington, the state ponied up an $8-billion long-term incentives package to keep the company from heading down the runway and taking off. But tax credits must be used judiciously and they should always be tied to strict performance requirements.

According to a recent analysis by the Indianapolis Star, Pence has since he took office in 2013 struggled to make sure the economic development incentives he’s approved as the IEDC chairman have achieved the desired results in job creation or job retention. According to the IndyStar, Pence’s board has awarded $24 million in incentives to 10 companies that—after receiving these incentives—shifted production to other countries, resulting in the layoffs of an estimated 3,800 Hoosier workers.

Here’s an example, as reported by the IndyStar: in 2014, handbag apparel maker Vera Bradley was awarded a $1.75-million, 10-year tax break for its $26.6-million expansion of its headquarters and distribution center in Roanoke, IN. As part of the deal, the company agreed to retain 567 employees and add 128 jobs by the end of 2017. However, in 2015, Vera Bradley closed its New Haven, IN design center and moved production to factories in Asia; the 250 workers at the center lost their jobs.

The Vera Bradley outcome illustrates the challenge all states face in deciding whether to offer incentives for projects: in most cases, these deals are assessed on an individual project basis, not in terms of the company’s business plans for its other production facilities. In recent months, Gov. Pence (spurred on by the Indiana Legislature) has moved to claw back some of the incentives that did not produce the promised results. Thus far, IN has leaned on four of the 10 companies who shipped out jobs to return $746,000 in taxpayer subsidies, which puts Indiana ahead of the curve among states in proactively toughening enforcement of incentives performance requirements.

Regarding Trump’s unprecedented hands-on approach to intervening in corporate business decisions he thinks are detrimental to America, some dire warnings are being issued from some unexpected places. Sen. Bernie Sanders, who like Trump delivered a rousing populist message during his presidential campaign (Bernie cast large corporations as a Goliath destroying the middle class), jumped on another favorite hobby horse—”corporate welfare”—to criticize Trump’s intervention at Carrier, which Sanders believes has set a terrible precedent.

“He has signaled to every corporation in America that they can threaten to offshore jobs in exchange for business-friendly tax benefits and incentives,” Sanders lamented, in an Op-Ed published by The Washington Post.

Take a chill pill, Bernie. Donald may have opted for the carrots in this negotiation, but we have no doubt he’s ready to wield some heavy sticks. While Trump’s opponents piled on during the presidential campaign regarding his qualifications (or lack thereof) for the nation’s most important job, they avoided mentioning his obvious grandmaster talent for a crucial skillset that has been missing from Washington for decades: deal-making. We look forward to President Trump applying his art of the deal mojo to the nauseating gridlock in Congress.

There’s nothing wrong (and a lot refreshing) about a president flexing his muscles and jawboning a few big corporate players to get them to change their minds about making big offshore moves. [MEMO to Trump Tower: Don’t skip your daily intelligence briefing before you fly in for the photo-op on the factory floor.] However, in terms of the big picture, presidential interventions of this sort will have only a marginal impact on whether Trump succeeds in delivering on his promise to make job growth in America great again.

More than anything else, what Trump is able to accomplish on a macro policy level will determine whether happy days are here again, jobs-wise. He’s challenged Congress to blow up the economic status quo and enact a bold menu of growth-stimulating measures, including slashing corporate tax rates to 15 percent; repatriating $2 trillion in corporate cash stored overseas with a one-time 10-percent tax amnesty; renegotiating trade deals; enforcing dumping penalties on subsidized foreign producers; and clearing away regulatory hurdles.

It will take all of Trump’s vaunted deal-making skills—deployed in Washington instead of in corporate boardrooms across the country—to push these initiatives through Congress; and Congress will have to up its game to make sure all of these measures are constructive rather than destructive (particularly the shift back to bilateral trade and the reassessment of environmental regulations).

A rising tide of growth is the best medicine for what ails us. Put America in a position to compete and there’ll be no need for the government—or a president as superhero—injecting themselves into business decisions. Throw in a real $1-trillion infrastructure rebuild and the USA will leave China choking on coal dust in the GDP sweepstakes.