At the end of last year, President Obama signed a bill lifting a 40-year ban on exports of U.S. crude oil that was imposed during the energy crisis of the 1970s. However, thus far in 2016, depressed global oil prices have prevented a surge in U.S. oil exports from developing. 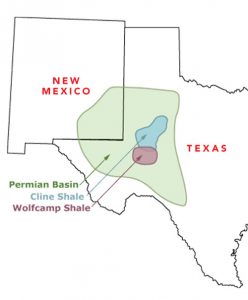 When the price of oil dropped below $40/barrel, fracking operations recovering oil from shale formations put on the brakes; an oil price of $60/barrel has been necessary to cover the cost of underground horizontal drilling. North Dakota lowered the volume on its booming output from the huge Bakken Formation; the high-cost recovery of oil from tar sands in Western Canada (more like strip-mining than fracking) slowed to a trickle.

But U.S. oil exports projections are about to change, big-time, due to what’s going on a mile beneath the surface in West Texas. In fact, it’s not a stretch to say the United States is poised to give Saudi Arabia and Russia a run for their money as the world’s largest oil exporters.

If you think news about Texas pulling oil out of the ground has century-old mold on it, think again. We’re not talking about the black gold that has gushed from old-school vertical drill rigs in TX since the 1920s. We’re talking about deposits deep underground in horizontal formations, reserves now believed to be larger than anyone ever thought they were.

It’s called the Permian Basin, because it formed in the 47-million-year geological epoch that occurred when dinosaurs still roamed the Earth. As indicated on our map, about three-quarters of the Basin sits in West Texas. Within the Permian Basin are two shale formations (known as the Cline and Wolfcamp formations). The Permian’s multiple layers of mile-deep oil-soaked shale remained largely untapped until a few years ago, when horizontal drilling techniques (also known as hydraulic fracturing, or fracking) perfected in other U.S. regions were adopted there.

The oil industry has known for decades there’s a lot of oil trapped in the shale under West Texas, but they weren’t sure how much.

Know they know. The Wolfcamp Formation alone is holding an estimated 20 billion barrels of oil in four layers of shale. That’s roughly three times larger than North Dakota’s Bakken field and the single largest U.S. “unconventional” crude reserve ever discovered, according to the U.S. Geological Survey. At current prices, now inching their way to $45/barrel, the Wolfcamp oil is worth about $900 billion.

The official estimate for the Wolfcamp reserves is buttressing energy player Pioneer Natural Resources’ (PNR) projection that the Permian Basin in its entirety is holding as much as 75 billion barrels of oil, most of it in Texas. If Irvine, TX-based PNR is correct, the Basin is second only to Saudi Arabia’s Ghawar field as the world’s largest oil reserve. According to the Fort Worth Star-Telegram, PNR’s production targets have been growing exponentially this year as its drilling in the Wolfcamp produced bigger gushers than they expected.

“The fact that this is the largest assessment of continuous oil we have ever done just goes to show that, even in areas that have produced billions of barrels of oil, there is still the potential to find billions more,” Walter Guidroz, coordinator for the U.S. Geological Survey’s energy resources program, said in the statement, as reported in the Star-Telegram.

We know what you’re thinking: this guy just told us it’s not cost-effective to recover oil by fracking when the price of crude is below $60/barrel. Well, hold your horses. Oil industry engineers who have been crawling all over West Texas and New Mexico in recent months report that the Permian deposits are so rich they can generate profits even when oil prices are stuck below $50/barrel. The Permian gushers are so powerful they’ve set off a land grab in West Texas as the oil bidness giants race to secure shale-drilling rights. The boom looks like it’s going to be much bigger than the black gold rush that took off in North Dakota in 2008. Here are some recent developments:

And lest we forget the biggest recent development of all, our newly elected president has promised to demolish all regulatory hurdles standing in the way of Drill, Baby, Drill.

Back in January, before the latest discoveries in the Permian Basin, the reports from West Texas were filled with gloom and doom. Ground zero of the oil slump was Big Lake, TX. A January article in the Star-Telegram featured a series of depressing interviews with local business owners who were watching their customers—laid off oilfield workers—pack up their pickup trucks and leave. Here’s a sample:

The week before Christmas, restaurant owner Terry Stevens warmly shook hands with oil workers and wished them a happy holiday as they walked out the door, some possibly for the last time. Stevens, a 52-year-old Michigan transplant, moved to this West Texas outpost five years ago…[oil] workers [had] flocked to [his] Mexican restaurant as well as the sports bar he and his wife own because of menus promising five-egg omelets and dragon-size hamburgers.

Big Lake was at the forefront of a national drilling downturn that began in November 2015. According to the oilfield services firm Baker Hughes, the number of rigs fell nationally from 1,928 to 1,676 last winter, including a decline in Texas from 902 to 766. In Reagan County, TX, the count fell from 34 to 23 on a single day in January, one of the sharpest drops in the Lone Star State, costing the county 1,100 jobs.

Even PNR was hunkering down last winter, refusing to comment when industry analysts pegged the break-even oil price for their fracking rigs in the lower portion of the Wolfcamp in the $61 to $75 a barrel range.

What a difference 75 billion barrels can make: Goldman Sachs analysts now are projecting the oil and gas industry will need to add between 80,000 and 100,000 workers just to keep up with demand by 2018. The increase in growth also would require an additional 700 oilrigs. The surge in exports from West Texas will be turbocharged by the fact that the light, low-sulfur crude (known in the industry as “light, sweet,” which sounds like a good cup of coffee) abundant in the TX shale fields is favored by European refineries that are not equipped to handle heavier grades of oil.

So Big Lake is gearing up for another boom. We haven’t been in touch with Terry Stevens, but we think it’s a good bet he’s ordering eggs by the truckload and a ton of chop meat for his dragon-burgers.

And the West Texas boom won’t be limited to its oil assets: Wolfcamp shale also holds 16 trillion cubic feet of natural gas and 1.6 billion barrels of gas liquids, according to the U.S. Geological Survey. Industry experts are projecting the U.S. will be the third-largest global exporter of liquified natural gas by 2020. The cost of natural gas production is three times higher in Europe and North-East Asia than it is in the U.S.

Big frowns on the faces in the Saudi Royal Palace and the Kremlin. U.S. energy independence? Check. Global energy domination? Coming soon to America, already the world’s largest oil and gas producer and about to become an energy exports superpower.

We’ll take a dragon-burger, well done, with a large side of calf fries and a 10-gallon mug of Lone Star Beer. Make it To Go.