ELSA Corporation will increase its automotive parts production in Madison County, IN to support growth at Subaru of Indiana Automotive (SIA) in Lafayette. With its growth, the company plans to create a total of 114 new jobs to support increased production. The company, a subsidiary of Japan-based Sakamoto Industries, is investing $111 million into a multi-phase expansion, which once complete, will expand the company’s operations to cover 686,000 square feet across multiple buildings on the company’s Elwood campus. 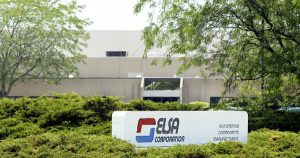 “As Indiana’s automotive industry grows, so does ELSA,” said Kyle Bubp, accounting manager at ELSA Corporation. “Japanese automakers across the state are each ramping up production, and that’s put us in a position where we need a larger workforce to meet demand. We’re excited to be growing in Elwood, Indiana, where the perfect location and a great business climate make this the obvious choice.”

In October 2015, the company completed construction of a 131,000-square-foot addition, and it will break ground this month on a second 63,000-square-foot addition. As part of its growth, the company is adding two production lines to produce fuel tanks, exhaust systems, air cleaners and air ducts for SIA, which assembles the Subaru Legacy, Outback and Impreza. ELSA plans to install new equipment over the next three years, allowing the company to double its production capacity to 1,800 automotive parts daily once complete.

SIA recently launched production of the new Subaru Impreza, previously produced in Japan. SIA, Subaru’s only U.S. manufacturing facility, has invested $1.3 billion into its Indiana operations over the past four years and has added 1,400 new jobs since last November to significantly increase its production volume capacity and build the new Impreza.

Since launching its expansion, ELSA has already hired more than 80 associates within the last two months, outpacing its initial hiring goals. The company now employs more than 350 associates, who are part of Sakamoto Industries’ global team of more than 800 people.

The Indiana Economic Development Corporation (IEDC) offered ELSA Corporation up to $500,000 in conditional tax credits based on the company’s plans to create up to 83 new jobs by 2018. Because the tax credits are performance-based, the company is not eligible to claim incentives until employees are hired. The city of Elwood is also considering additional tax incentives.

“The impact of Subaru’s historic investment in Lafayette is being felt across the state,” said Governor Mike Pence. “As Subaru launched production of the new Impreza last week, auto suppliers across the state like ELSA are expanding and creating quality new jobs for Hoosiers. In Indiana, we have built a business climate that attracts new investment and supports job creation, helping our automotive industry grow into the second-largest in the nation. More than 500 automotive suppliers like ELSA operate here, building cars and trucks used across the globe and helping Hoosier businesses add more than 161,000 new jobs in Indiana since 2013.”

ELSA is the latest in a long line of Japanese companies that are choosing Indiana for their growth plans, following recent announcements from Japanese companies including M&C Tech Indiana in Washington, Consolidated Grain and Barge in Mount Vernon, Moriden America in Carmel, Aisin USA in Seymour, Ryobi Die Casting and Nippon Steel & Sumitomo Metal in Shelbyville, Toyota Boshoku in Princeton and NB Coatings in Hobart. More than 45 Japan-based companies have committed to locating or expanding in Indiana in the last three and a half years, with plans to create more than 6,400 new jobs and invest more than $2.2 billion into the state. Among all U.S. states, Indiana has the largest amount of Japanese investment per capita.