In an epic Game 7 of the 2016 World Series that was so memorable it took an extra inning to complete, the Chicago Cubs finally ended a 108-year championship drought with an 8-7 victory over the Cleveland Indians. 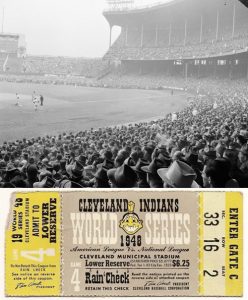 The Chicago team needed an assist from the umpires, who interrupted a ferocious Indians comeback with an impulsive 30-minute rain delay that enabled the Cubbies to calm their shattered nerves in the clubhouse (they’d blown a four-run lead, thanks to some mind-boggling blunders by their eccentric manager, Joe Madden) while the Cleveland relief pitcher’s arm got numb.

As the Cubbies and their legions of acolytes ecstatically reveled in exorcising the most famous century-long sports curse, long-suffering Cleveland fans carved another bitter X onto their “wait until next year” ledger. The Indians last won the World Series in 1948.

But on a gloriously historic night for what used to be known as our national pastime, another type of history also was being made, the kind that leaves a bitter aftertaste. There’s something rotten in the state of America’s big-league professional sports, and it was on display in the midst of our penultimate game.

If you got the impression there were more Chicago fans in the seats at Progressive Field in Cleveland during Game 7 than hometown loyalists, you weren’t hallucinating. An estimated 60 percent of the seats in the Cleveland baseball stadium were filled with folks from the Windy City (and a diaspora of former Chicago natives) who invaded Cleveland to be on hand for the Cubs’ encounter with the Holy Grail of baseball immortality.

Old-timers will be forgiven here if they conjure a Norman Rockwell vision of hardscrabble working-class denizens of Wrigleyville climbing into beat-up cars, driving the 354 miles from Chicago to Cleveland, pitching bedrolls on long lines in front of ticket windows at the ballpark and enduring a 48- or 72-hour wait in brisk fall weather to secure their World Series tickets. That idyllic vision of Americana vanished decades ago, around the time hula hoops and twist parties were the rage.

The egalitarian opportunity for an average American to queue up at a stadium ticket window and buy a seat at the World Series was the norm the last time the Cleveland Indians triumphed in the Fall Classic. In 1948, the Indians played in Municipal Stadium, a cavernous public facility built in 1928 after city voters approved $2.5 million in new taxes to pay for it. Municipal Stadium had nearly twice the capacity of the Indians’ current digs. A record 86,388 people jammed into Municipal Stadium for Game 5 of the Indians’ battle with the Boston Braves (a National League club which eventually migrated to Milwaukee and Atlanta).

The price of a field-level seat at the 1948 World Series in Cleveland Municipal Stadium was $6.25. A bleacher seat, out where a guy in Chief Wahoo getup incessantly beat a drum, could be had for a dollar.

In 1990, Cuyahoga County, OH voters approved a new 15-year “sin tax” on alcohol and cigarette sales. The tax revenue was applied to cover $84 million of the $175 million raised to build a new stadium for the Indians, now called Progressive Field (named for the insurance giant that paid $57.6 million for 16 years of naming rights).

During Game 7 on Wednesday night, a clean-shaven Joe Buck, the Fox TV announcer, casually delivered an eye-opening factoid about the 2016 World Series. [Buck, the Sybil of facial hair, sported a variety of looks during the baseball playoffs, from closely cropped stubble to a full Grizzly Adams-style beard.] The average price of a 2016 World Series ticket in Cleveland was $1,800, he told us, adding that some folks sitting behind the Cubs’ dugout had shelled out $10,000 per seat and at least two had forked over $15,000. Other news reports confirmed that the average ticket price for Game 7 at Progressive Field spiked to $4,700. According to these reports, the average seat price for the three WS games in Chicago was $7,200.

Of course, we’re talking primarily about resale values here, but that doesn’t change the central reality: the average fan has largely been cut out of the picture when it comes to attending big-time sporting events in America.

The dirty little secret is that season ticket holders and corporate luxury box titans are given the first opportunity to make bulk purchases of overpriced “strips” of post-season playoff tickets. A majority of these strips quickly are flipped on online auction outlets like Stub Hub to the highest bidders, their speculative prices increasing by growth percentages last seen during the 2007 housing bubble.

MLB teams cover this greed-fest with the public-relations fig leaf of annual pre-Series announcements that they’ll briefly open ticket windows at their stadiums to the public so the average Joe or Jane can purchase “a limited number of seats” for the base price of a ticket. But even this gesture usually is rigged against regular people with limited incomes.

The Cleveland Indians’ team owners made it possible for the lion’s share of the “limited number of seats” available for the general public to be scooped up by people who make a living flipping tickets for resale. The ball club first announced that World Series tickets would go on sale at 10 a.m. on Wednesday, Oct. 19, but the fine print said these tickets only would be sold to “previously registered members” of a group called “Indians Insiders” who were sent a one-time use code on Tuesday evening (Oct. 18) giving them the ability to purchase as many as eight tickets per game. The tickets were delivered digitally to the ‘Insiders’ at 9 a.m. Thursday, Oct. 20.

At 10 a.m., Thursday, Oct. 20, what was now called a “very limited sale” of tickets was made available to the general public. We looked hard to find the precise number of tickets that were offered to the public at Progressive’s ticket window, but we couldn’t nail down the count. However, we can confirm that the “very limited sale” lasted less than 17 minutes before they put up the Sold Out sign.

We’ll make an educated guess here and add that the front end of the public-sale ticket lines were packed with seedy-looking guys wearing shades, carrying thick wads of cash and holding smartphones locked onto the Stub Hub auction page. It’s also not a stretch to assume that the invasion of well-off folks from Chicago into the home park of the Indians for Game 7 was facilitated in part by “Indians Insiders” raking in dough from Chicago’s elite with resales.

Here’s the bottom line: Clevelanders are welcome to sit at home or in a local tavern and raise a can of beer that is helping to pay off Progressive Field’s debts as they watch their team try to win the World Series, but they need to take out an equity loan on their homes if they want to attend an historic game there.