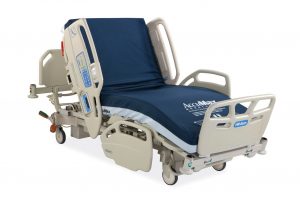 The expansion will bring additional manufacturing, marketing and research and development jobs to the area, and comes one year after Hill-Rom acquired Welch Allyn. Welch Allyn is based in Central New York and has maintained a significant presence in the region for more than 100 years.

Hill-Rom’s expansion in Central New York will be fueled in part by the receipt of up to $12 million in state incentives and grants. Through participation in New York State’s Excelsior Jobs Program, the company will be eligible for up to $6 million in tax credits over a 10-year period based on job creation commitments, qualifying capital investments and research and development expenditures. In addition, Welch Allyn has been awarded a New York State Upstate Revitalization Initiative Grant of $6 million based on the creation of new jobs at the company’s facilities in Central New York.

“We are grateful to Governor Cuomo, Empire State Development, Senators Schumer and Gillibrand, Congressman Katko, State Senator DeFrancisco and Assemblyman Finch, as well as the Onondaga County Office of Economic Development and CenterState CEO, and their teams for their commitment and support to bringing well-paying jobs to Central New York,” said Hill-Rom president and CEO John J. Greisch. “Hill-Rom is delighted to be strengthening our presence in the area through these critical economic development programs.”

U.S. Senator Charles E. Schumer, who led the effort to suspend the Medical Device Tax and worked closely with Hill-Rom and Welch Allyn throughout the transition process, said: “Our successful effort to sideline the onerous medical device tax played a pivotal role in the creation of these 100 jobs in New York. I am proud that I was able to persuade my colleagues in the Senate to delay this tax. Today’s announcement is proof that the medical device tax needs to be permanently repealed so Welch Allyn will remain a source of economic energy for Central New York for years to come.”

Hill-Rom has nearly doubled its size over the past two years through acquisitions, including Trumpf Medical and Welch Allyn, as well as organic growth in its legacy businesses. One of the company’s stated profit improvement initiatives is to drive efficiency by optimizing the current manufacturing network of over 15 facilities. Hill-Rom’s decision to add over 100 positions in Central New York is part of the company’s facility consolidation effort.

“Our Welch Allyn facility in Skaneateles is a world-class administrative, research and manufacturing site. Investing more in our people and in Central New York benefits our employees, our business and the local economy,” said Alton Shader, president of Welch Allyn.