Dwight Eisenhower’s experience as the Supreme Allied Commander in WWII motivated him as president to champion the construction of the U.S. Interstate Highway System. Ike had witnessed first-hand Germany’s ability to conduct blitzkrieg by rapidly moving tanks along the Autobahn, then the most impressive network of highways in the world. He wanted the U.S. Army to have the same capability if we had to defend our homeland. 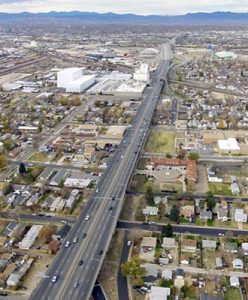 Thankfully, the need to defend the U.S. from a land invasion by moving tanks around on our highways has been obsolete for decades; but the government’s official name for our 48,000-mile network of Interstates still evokes a military meme: The Dwight D. Eisenhower System of Interstate and Defense Highways. It’s not a stretch to call Ike’s legacy project, most of which was built between 1956 and 1990, one of the greatest feats of human engineering.

The Interstate Highway System transformed America, opening up millions of square miles for development and essentially creating the suburban lifestyle of the second half of the 20th century. The planners of the Interstate Highway System focused on moving people across the country quickly, so the grid incorporated several ring roads (a.k.a. beltways) that permit motorists to avoid driving through the heart of major cities.

But the creation of our national highway network didn’t take place in a vacuum: major U.S. cities still wanted to be connected, so many of the routes put superhighways in the middle of urban centers. Even before construction of the Interstates began in 1956, scores of U.S. cities had begun to shape their urban transit systems around the automobile. They put streetcars in mothballs and dismantled aging, but sensible light-rail systems; they upgraded boulevards into highways; and, as the Interstates moved through their outskirts, they blasted through city centers and neighborhoods to build urban highways to connect themselves directly to the emerging national grid.

The competition to build urban superhighways was jump-started by New York City. In 1945, master builder Robert Moses (immortalized in Robert Caro’s masterpiece on urban development, The Power Broker) unveiled his plan for the Cross Bronx Expressway, the first highway built through an already crowded urban environment. The project, which took 15 years to complete, severed the South Bronx from the rest of the borough. The complexity of keeping existing roadways and subways working during construction forced New York to spend $40 million on a single mile of the Expressway ($353 million in today’s dollars).

Not to be outdone by NYC, Boston erected I-93, an elevated six-lane highway through the center of Beantown that came to be known as the Central Artery. The 1.5-mile-long Artery soon became notorious for a vehicular form of cholesterol (by 1990, it was clogged with up to 190,000 vehicles per day).

All over America, cities followed these examples and the damage to urban neighborhoods was devastating. The full list that succumbed to this temptation is too long for this space, so here’s a sampling: I-94, which sliced through the middle of Chicago and Milwaukee, as well as parts of Detroit; I-70, which cut through the middle of Denver; I-40, which ran through the heart of Little Rock, AR; the I-490 Inner Loop, which severed downtown Rochester, NY; and I-40, which bisected Albuquerque, NM. The list goes on and on.

Pouring salt on the wounds of divided city neighborhoods is the fact that a basic assumption for building these highways was wrong: city highways don’t alleviate traffic congestion, they create more of it. A University of Connecticut study revealed that cities which opted for freeways, parking facilities and monolithic developments were flooded with new traffic, the volume of which continued to grow while jobs were lost and residents migrated to the suburbs. The few American cities that preserved their prewar street configurations saw much less growth in traffic congestion and have retained their character as vibrant pedestrian-friendly cities.

Here’s the good news: there’s an accelerating urban movement to undo the damage superhighways have done to America’s cities. More and more cities are choosing to cover them, bypass them or even tear them down altogether. A few recent examples:

We wish these and other city highway adjustment projects well, but we encourage everyone to remember the most compelling example of how NOT to remove a highway from the middle of a city.

Boston’s Central Artery/Tunnel Project, famously known as the Big Dig, rerouted I-93 through the new Ted Williams Tunnel. Constructed between 1991 and 2007, the Big Dig was the most expensive highway project in the U.S. It was plagued by escalating cost and scheduling overruns, leaks, design flaws, the use of substandard materials and the death of a construction worker. The project originally was scheduled to be completed in 1998 at an estimated cost of $2.8 billion (in 1982 dollars).

When it was finished in December 2007, the estimated price tag for the Big Dig was $14.6 billion. Several criminal prosecutions followed the ribbon cutting. The Boston Globe now estimates the project ultimately will cost $22 billion, including interest. It will not be paid off until 2038.