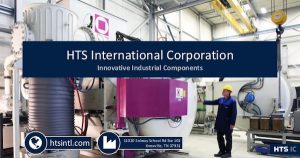 “Our core mission for our U.S. operations is making U.S. manufacturers more efficient and competitive on a global scale,” said HTS International CEO William Sames. “East Tennessee is very central and close to the manufacturers we supply. With the increasing automotive presence in the Southeast, we see the Knoxville area as a strategic location for our engineering services.”

In addition to its global and North American headquarters, HTS International plans to house an R&D lab, a metallurgical lab and industrial metal additive manufacturing equipment for production in the facility. The facility will include 10,000 square feet of office space and between 50,000 and 60,000 square feet for R&D and production.

“We are seeing our technology revolutionize the die casting and plastic molding industries,” Sames added. “By significantly reducing the cycle time of production, sometimes by 50 percent or more, we are seeing companies reshore production to the U.S. and expand existing U.S. production.”

“A global company can choose to establish its headquarters anywhere in the world. HTS International’s decision to establish its first U.S. manufacturing facility in Knox County underscores our skilled workforce and the hub of advanced manufacturing activity in Tennessee,” said Gov. Bill Haslam. “Thanks to HTS International for investing in our state and bringing us another step closer to making Tennessee the No. 1 location in the Southeast for high quality jobs.”

“Employment in Tennessee’s advanced manufacturing sector has grown more than 33 percent since 2010, four times higher than the nation’s growth average for these high-skilled jobs,” said Tennessee Economic and Community Development Commissioner Randy Boyd. “That type of success, fueled by innovative existing companies and the breadth of expertise found in our workforce, helps our state recruit new advanced manufacturing companies. It’s a virtuous cycle that is critical in attracting global companies such as HTS International.”

“Knox County is extremely lucky for HTS International to locate its headquarters, research and development and manufacturing operations in the Pellissippi Corporate Center,” said Knox County Mayor Tim Burchett. “This again stresses the importance of having a ready-to-go business park land so Knox County has a place for next generation technology companies like HTS International. The STEM-rich technology jobs that HTS International will create will provide a better quality of life for our neighbors and for that, I’m grateful.”

Relocating or Expanding Your Business In Tennesee