If you were asked to pick one word to describe both Paris and Los Angeles—and it had to be the same word—you’d have a tough time making the choice, right? When our thoughts turn to the City of Light, words like “elegant,” “boulevard,” “19th century” and “romantic” spring to mind. When we think of the City of Angels, “sprawling,” “apocalyptic,” “21st century” and “freeway” pop up in our frontal lobe. 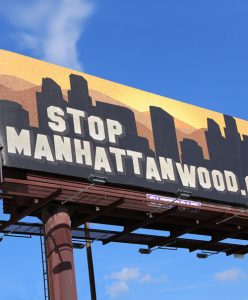 But, for most of the past century at least, there’s been a single word that could aptly describe both cities: short. Paris and L.A. both have had an historic aversion to skyscrapers, for different reasons. The Parisians thankfully have restricted modern glass towers to the fringes of the French capital to preserve the essence of what we can all agree is the most beautiful city on Earth. Los Angeles, with so much open land to fill, just kept spreading out sideways—eventually encompassing more than 500 square miles. Only about three decades ago did L.A. start to coalesce around something that could be called a downtown. When you look down on L.A. from the seat of an airliner (assuming you can see it through the smog), the emerging city center still looks like a handful of upturned thumbtacks in the middle of a sprawling, endless urban carpet.

That may be about to change. Southern California came out of the Great Recession with what seems like an insatiable urge to build UP. The landscape in L.A. now is full of huge construction cranes erecting skyscrapers from Santa Monica to Malibu.

Not everyone is pleased with the rise of L.A. 2.0. The upward building boom has provoked what you could call an existential debate about the soul of L.A., with developers and city officials battling preservationists. Like the average year-round temperature, the debate about the urban/suburban character of L.A. has been heating up due to a shortage of affordable housing and an influx of people moving back into the city center. But the reality is that L.A. finally may have hit a once unthinkable rubicon: the largest city, geographically, in the known universe finally may be running out of space to build low and wide.

“The sprawl has hit the wall in L.A.,” Mayor Eric Garcetti told The New York Times in a recent interview. Garcetti is urging Angelino old-timers, worked up about the proliferation of high-rise towers popping up all over the city, to take a chill pill. “It’s not whether or not density is going to come,” he told The Times. “It’s whether we plan for it or not. Height makes you think it’s more dense, (but) it doesn’t always compute that way.”

Despite Garcetti’s soothing words, recent reports indicate the backlash may be building. Critics say development in L.A. to date has been threatening to overwhelm  L.A. neighborhoods filled with classic old homes. “Stop Manhattanwood” billboards are popping up all over Hollywood, near a site where two 28-story towers have been approved for construction. Neighborhood groups are collecting signatures for a voter initiative that would impose a two-year moratorium on out-of-scale projects that require special city zoning variations. The initiative needs 67,000 signatures to be placed on the ballot; it already has 104,000 signatures. Supporters say the gentrification in L.A. is rapidly pushing the lower middle class and the working poor out of the city.

Ironically, the growth of high-rise development throughout Los Angeles appears to be an offshoot of a recent civic improvement that most Angelinos agree was long overdue: the completion of mass-transit lines throughout the city. As it begins to transition from growth driven by freeways notoriously clogged with mid-afternoon traffic (the rush hour begins at 3 p.m. in L.A.) to a modern transportation hub, city fathers understandably are encouraging development along the new mass-transit lines.

With its ability to build out waning, it’s inevitable that Los Angeles increasingly will build up (as in skyward). We sincerely hope L.A. will be able to preserve most of its surreal funkiness—a patchwork of apocalyptic urban zones nestled shoulder-to-shoulder with bucolic ’50s-style suburbia—as its treasured ability to build outward is gradually replaced by the necessity of building upward.

Think of it this way, L.A.: a place that calls itself the City of Angels is getting closer to Heaven.