Earlier this year, a new study published in the journal Nature predicted a rise in sea levels of more than six feet by the end of this century, double the previous consensus estimates of the global scientific community. 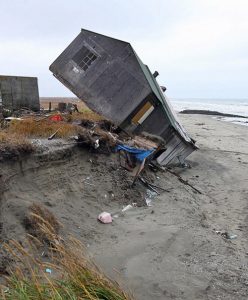 Unlike previous projections, which assumed the melting of northern glaciers due to climate change would be the primary source of rising sea levels in coming decades, this study (jointly authored by researchers at the University of Massachusetts and Penn State University) factored in an increasingly likely break-up of the ice sheet covering Western Antarctica.

If the new study is correct, this is very bad news for U.S. coasts. According to the scientists, a drastic reduction in the mass of Antarctica also would alter the polar continent’s gravitational pull on the ocean, sending rising seas surging back toward the opposite end of the world. If the experts are right, a person born in 2016 will live to see coastal cities like Miami Beach and Charleston engulfed by the encroaching Atlantic; New Orleans will be an island guarded by levies and Manhattan will need a sea wall to keep Wall Street from drowning [Memo to 2050 NYC mayor: use a different reason when you ask for funding].

According to a study commissioned by the British government, as many as 200 million people living around the world may be displaced by 2050 because of climate change. By the end of the century, the number of people who have to migrate may be more than a billion. We’ve been assuming that planning for the Great Migration wouldn’t commence for another decade or two, giving us a few years to bloviate in this space about the need to rethink coastal development. But then we heard some astounding news from Alaska: the migration already is underway in the nation’s northernmost state.

The folks of Shishmaref, a tiny village that sits atop a barrier island about 120 miles north of Nome, voted last month to move the entire community to the mainland.

Shishmaref is an Inupiat community of about 600 people on Sarichef, an island north of the Bering Strait that is about one-quarter mile wide and two and a half miles long. It’s been battered for decades by storm surges that have demolished buildings and infrastructure; the island itself has been shrinking, with more than 200 feet of shore eaten away by erosion since 1969.

Last month’s vote, which was scheduled after a relocation study made public in February, actually was the third time in the past 40 years that Shishmaref has held a referendum on relocating to the mainland. According to a report in The New York Times, the village rejected ballot proposals to move in 1973 and 2002. The village spent more than $27 million from 2005 to 2009 on coastal protection measures; but the recent relocation study found these measures could only be expected to hold back the ocean for 15 years.

In last month’s election, residents voted 89 to 78 to leave. It will cost the village at least $180 million to move to one of two sites under consideration about five miles inland from the island. According to the Times report, the close vote in Shishmarek was due to concerns that the two relocations sites, known as Old Pond and West Tin Creek Hills, do not have access to barges traditionally used to deliver critical supplies to isolated parts of the Alaskan coast. The “no” camp also included many who could not bear to consider abandoning a village that has existed for 400 years.

In Alaska, 31 villages face “imminent threat of destruction” from erosion and flooding, according to the Arctic Institute, a nonprofit based in Washington. While many of those villages have a decade or two to pull up roots and head for higher ground before they become uninhabitable, more than a dozen already have decided to begin relocating. Newtok, population 300, is building new homes and roads on an inland site about 12 miles away in southwest Alaska. A handful of residents have made the move, but water and sewage treatment facilities and a power plant will need to be built before the rest of the village can join them, according a report in Alaska Public Media.

The new phenomenon of “climate refugees” is not limited to the northern U.S. coastal regions. In January, Congress allocated $48 million to relocate Isle de Jean Charles, a Louisiana island that is sinking into the Gulf of Mexico.

The research paper published in Nature found that West Antarctica is vulnerable to a condition called “marine ice sheet instability.” Huge glaciers flow below sea level and lie on downward sloping seabeds. Warmer ocean water can melt them from below; as the glaciers retreat, more and more ice will be exposed to melting. Additionally, two new ice processes already seen in parts of Greenland now are occurring in West Antarctica: “hydrofracture,” in which water formed by the melting of snow and ice atop a glacier’s stabilizing ice shelf causes it to break up; and “cliff collapse,” in which a sheer ice cliff 100 meters or more above sea level becomes unstable and collapses into the ocean. 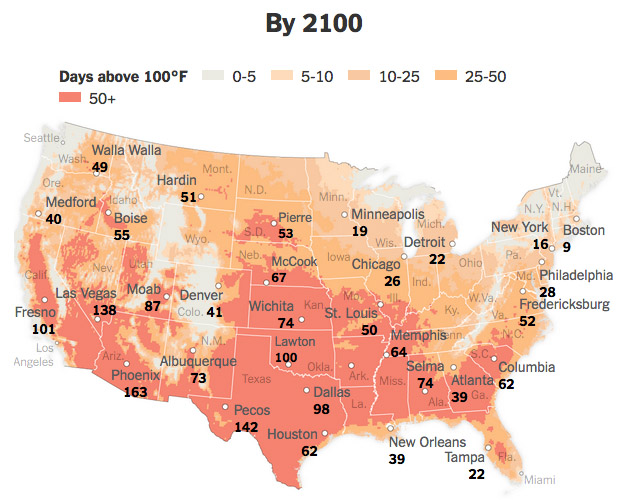 Climate refugees from America’s coastal cities would be wise to consult the map at right (from projections made by the World Climate Research Programme, based on current levels of carbon emissions) before they choose a new home on the mainland. This depressing illustration projects that, by 2100, a wide swath of the United States may experience temperatures in excess of 100 degrees F. for more than 50 days each year.

So perhaps the Great Migration will move in two directions at the same time in the U.S.: folks moving inland to escape the rising seas and landlubbers moving north to escape the heat.