In 2008, the Cedar River crested at 31 feet and turned Cedar Rapids, IA into, well, Cedar Rapids. By the time the water receded, thousands of homes and businesses were destroyed in the worst natural disaster in Iowa’s history. 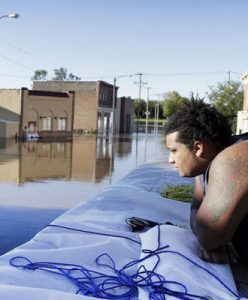 In the wake of the 2008 flooding, officials in Iowa’s second-largest city initiated a $600-million flood-control project to eliminate the threat from the rising river once and for all.

If you’re assuming here that what follows is a report on how well the new system is working, you’ll have to wait awhile for that. Work on the flood-control project, which will take an estimated 20 years to complete, has yet to begin. And if you’re guessing the hold-up is due to a lack of funding, you’d be wrong: the state has allocated $269 million for the project, the city has allocated $110 million and Congress approved $73 million for it in this year’s Water Resources Development Act.

But the Army Corps of Engineers can’t get started until the federal money is released; the federal money has been approved for the Cedar Rapids project, but it hasn’t been allocated because the project wasn’t earmarked. Are we confused yet?

Back in 2011, when everyone in Washington was obsessing over the size of the federal debt, Congress decided that the best way to cure the federal government’s addiction to spending was to install an automatic braking system on the appropriations process. A series of automatic budget cuts, known as sequestration, was initiated and earmarking was prohibited.

For more than a century, earmarking was the way things really got done in Washington. An obscure project buried at the base of a mountain of spending proposals, authorized in an omnibus spending bill, could rapidly ascend to the peak of priorities if it secured an earmark. Earmarks were traded like commodities in the Congressional cloakrooms, a 19th-century bazaar of favors, gratuities and back-scratching. Every major bill enacted by Congress was festooned like a Christmas tree with earmarks, and the spending tree was not lit until all were in place.

But in its haste to embrace the feel-good symbolism of an end to earmarks, Congress neglected to replace the tradition with a new process to determine the pecking order of which appropriations are funded first (meaning which projects get built when). So, by default, these decisions now revert to the federal agency that is overseeing the project. Which brings us to the bookkeepers of the Army Corps of Engineers.

In the absence of a specific direction from Congress prioritizing the four projects approved under the aforementioned Water Resources Development Act (in other words, without an earmark), the Army Corps of Engineers consulted its rule book and applied a formula that probably was enacted by the Hoover Administration: a cost-benefit analysis that rates the projects based on the value of the property surrounding them; the higher the value, the faster the project gets built.

Here’s the bottom line: the Cedar Rapids flood-control project is on hold because property values in the city are lower than in areas surrounding the other projects authorized by the Water Resources Development Act.

It’s such a simple formula, they probably don’t even need a calculator to come up with the result. No messy variables or unpredictable estimates to factor in, like the number of people who might drown in the next flood or the number of homes that will be destroyed or the number of years that will elapse before the river rises again and the floodwaters come in and the people drown.

Regarding the latter, we’ve already got some empirical data for the Army Corps if it wants to adjust its formula to accommodate the human impact of its decision: this week, the Cedar River crested at 22 feet, just nine feet below the historic 2008 deluge.

But, this time, the floodwaters did not swamp Cedar Rapids. The city enacted an emergency plan and constructed a temporary 9.8-mile system of Hesco barriers and earthen berms. After city residents were evacuated, the elaborate system of temporary floodwalls was installed over the weekend—that’s right, the entire 9.8-mile barrier was built in less than 48 hours.

The Hesco barriers used to hold back the floodwaters are comprised of steel mesh panels, lined with a thick polypropylene material that can be quickly filled with sand or dirt, usually using a front-loader. The barriers, which have been used extensively by the military in Iraq and Afghanistan, keep water from seeping through to the other side, but allow moisture to drain out the bottom. After the barriers were installed in Cedar Rapids, city crews had worked through the night to patch any weaknesses in the protection system and pump out any water that seeped through the barriers or came up through the saturated ground.

Thankfully, the temporary floodwall system worked; as the river crested, most of Cedar Rapids remained dry. So it only took about 48 hours for the heroic folks of Iowa’s second-largest city to accomplish something Washington has failed to do for eight years: keep the Cedar River from engulfing the city. 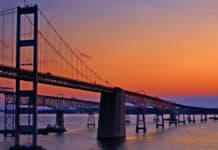 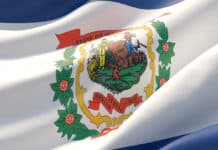 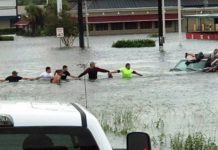