For most of its history, the picturesque city of Burlington, VT was famous for a few pleasantly quirky New England oddities, none of which had to do with high technology. 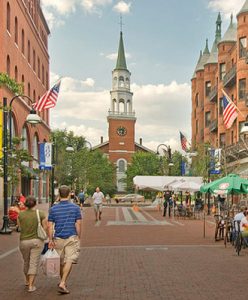 Nestled on the eastern shore of Lake Champlain, Burlington is the least populous city in the U.S. to be the most populous within its state. That’s right, it only takes 42,452 residents to claim Vermont’s urban crown.

Although you’d think it wouldn’t be hard to form a consensus about the city’s origins with such a small group, the denizens of Burlington still can’t agree on exactly how the city got its name. One camp believes the moniker derived from Richard Boyle, the 3rd Earl of Burlington in England; others insist the name honors the wealthy and politically connected Burling family of neighboring New York, which bought up large tracts of land across the border along Lake Champlain. The town was organized in 1785, so they’ve only had 231 years to straighten that out.

Anti-war sentiments were strong in Burlington long before the hippies arrived in the 1970s; the city opposed the War of 1812, refusing to provide militia units or financial support so as not to put a damper on its brisk trade with Canada. The federal government garrisoned 5,000 solders in Burlington anyway (quartering some of them in the main building of the University of Vermont), which induced the British to shell Burlington in a bombardment that reportedly lasted less than an hour due to the non-strategic status of the target.

Burlington’s geographic location shaped its industry throughout the 19th century. Its position on Lake Champlain made it a port of entry for trade, which rapidly expanded after completion of the Champlain Canal in 1823 and the Erie Canal in 1825. Wharves strategically located near rail lines made Burlington one of the nation’s earliest logistics hubs; freight unloaded from steamboats (as well as disembarking passengers) could easily connect with the Rutland & Burlington Railroad and the Vermont Central Railroad. By the time it was incorporated as a city in 1865, Burlington had become a bustling hub for the timber industry and a center of manufacturing.

It wasn’t until 1978 that Vermont’s most-populous city garnered national attention, when two entrepreneurs (okay, we called them hippies then) started making ice cream in a renovated gas station. Ben & Jerry’s became the counterculture’s favorite dessert; Deadheads flocked to the shelves to pick up a pint of Cherry Garcia. Living near Ben & Jerry’s ice-cream factory was a quirky guy from Brooklyn, NY who would again bring the national spotlight to Burlington in 2016.

In 1964, Brooklyn-born Bernie Sanders used $2,500 he inherited from his father to buy 85 acres of land in the woods of central Vermont (the equivalent today, cost-wise, of what it takes per month to rent 85 feet of apartment space in Brooklyn Heights). The only structure on the property was a tiny maple sugar shack with a dirt floor. Bernie split his time between NYC and Vermont, doing odd jobs like peddling homemade film strips of U.S. history door-to-door. [Bernie insists he never was a hippie, just a socialist; folks familiar with the era define as a socialist as a hippie who read Karl Marx instead of Groucho. We’ll split the difference and call him a grouchy socialist.] Legend has it that when Burlington’s future mayor (his margin of victory in 1981 was 10 votes) had trouble scraping up his rent money, Bernie would camp out in the sugar shack. The future U.S. senator and Democratic candidate for president would cook his meals on a can of Sterno, which his friends called “Bern-o.” So it’s safe to assume that the first person associated with Sanders to Feel the Bern was Bernie himself.

The embers of Bernie’s quixotic campaign for president this year have cooled off, but Burlington itself is getting hotter: the city is busy reinventing itself as a high-tech hub. A report this week in The New York Times details how Burlington’s forward-thinking green power grid (Burlington was the first U.S. city to be powered 100 percent by alternative energy) and one-gigabit connectivity have made it a prime location for innovators and incubators.

Burlington’s wise investment in a fiber network has paid off in an influx of tech pioneers. Ground zero for Burlington’s growing community of tech newbies is the Vermont Center for Emerging Technologies, a thriving incubator residing within a plain brick building. The tech center, known as VCET, provides free mentoring, seed money and ample co-working spaces that are available to entrepreneurs for a low fee. Students can use these spaces for free; according to the Times, two 20-year-old college students currently are working there on a new website, BeaconVT, that will function like a dating site but instead will match college students with employers.

It seems like everyone in Burlington wants to get a piece of the high-tech action: the city entered into a partnership with US Ignite, an app-builder, to form BTV Ignite, aiming to grow the city’s network of innovation. The guy who heads BTV Ignite is Micheal Schirling, Burlington’s former police chief. “Smart cities and new technologies have the potential to change everything,” the former lawman told the Times.

Burlington’s emergence as a high-tech hot spot has rewarded the city with an enviable unemployment rate of 2.3 percent. But the rapid growth sector has created a new challenge for this bucolic hamlet in the heart of New England: making sure the availability of skilled workers matches the rate of job creation. According to the Times, hundreds of available coding jobs (posted on job boards throughout the city) remain unfilled.

To meet this challenge, Burlington is getting some help from Washington. Earlier this year, the White House gave Burlington its TechHire city designation, which makes the city eligible for workforce development grants that assist in linking local employers with local workers and in helping these workers acquire the skills they need for high-tech jobs. The TechHire mandate for Burlington sets a goal of training 400 new technology workers by 2020.

Vermont Hitec, a local non-profit, is working with tech companies to offer “boot camps” (online and in classrooms) that teach skills including medical coding and other programming specialties. Vermont Information Processing, a developer of software for the beverage industry, is making use of Vermont Hitec’s service to recruit local workers. The University of Vermont (now cleared of soldiers fighting the British) has expanded its biotech curricula; Champlain College is pitching in by offering degrees in digital forensics and game programming, and a special program that allows federal employees to get online degrees in high-growth fields. One Champlain student launched a successful startup, GameTheory, while she was still in college, the Times reports.

Burlington’s roots in tech startups goes back to 1969, when healthcare software maker IDX Systems was founded in the city. As the dot.com era blossomed at dawn of the milleniem, the city became home to web startups including MyWebGrocer and Dealer.com. One of Dealer.com’s founders, now on the VCET board, relocated from Cambridge, MA and became an angel investor who has funded eight start-ups in Burlington.

In 2014, Burlington became one of the first cities in the U.S. to get all of its power from alternative sources including wind, water and biomass. The city owns what it likes to call its “green grid” and offers incentives for improving energy efficiency, including free energy audits. As a result of the push for energy efficiency, Burlington has not raised its electricity rates in eight years. The city also has installed chargers in downtown parking spaces to accommodate electric cars.

A green grid and a matrix of high-tech jobs ready to reward young entrepreneurs with a big pile of green paper. We can feel the red-hot burn of your growth sector, Burlington. Time for us to open a pint of Ben & Jerry’s Empower Mint.