SIG SAUER, Inc. has finalized its plans to relocate its ammunition manufacturing operation from Eubank, KY to a permanent site in Jacksonville, AR. The company will relocate its Elite Performance Ammunition manufacturing operation to an existing building in Jacksonville and anticipates employing 50 people in the initial relocation phase, with additional jobs planned for the future. The new site provides significant room for expansion, a key factor in the company’s decision to relocate to Jacksonville. 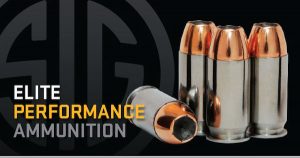 “We have been searching for a permanent relocation site for our ammunition division for several years and now, coupled with an excellent physical location and exceptional economic incentives provided by the State of Arkansas, we have found the ideal site,” said Dan Powers, president of the SIG SAUER Ammunition Division. “The new location in Jacksonville gives us the room we need to expand as we continue to grow and is also beneficial from a shipping and logistical standpoint.

“SIG SAUER is committed to becoming a major player in the world-wide ammunition markets,” Powers continued. “Our advanced technology will allow SIG SAUER to design and develop world-class, precision-performance ammunition, and our new facility will ensure room for even more state-of-the-art equipment, and a much larger ballistics test lab to facilitate our manufacturing and R&D processes.”

“SIG SAUER was one of the first calls I made as Governor, and I am delighted they chose our state when making the decision to expand,” said Arkansas Governor Asa Hutchinson. “The fact that a world-class company like SIG SAUER is choosing to do business in the state adds to our momentum in manufacturing, and we appreciate this significant commitment they are making to locate in Arkansas.”

SIG SAUER anticipates being up and running in the new Jacksonville ammunition facility by the end of the year. This move marks another milestone in the company’s commitment to become a total solutions provider in the shooting and hunting industry. In addition to designing and manufacturing firearms and ammunition, SIG SAUER is also a growing force in the silencers, optics, airguns and accessories sectors.

Relocating or Expanding Your Business In Arkansas