The New York City Water System (NYCWS) is one of the greatest engineering feats of all time. The system is served by 19 reservoirs and three controlled lakes with a total storage capacity of approximately 580 billion gallons. Like the only water system comparable to it—the aqueducts built by the ancient Romans—about 95 percent of this pristine upstate water is delivered to the city by gravity, which propels it down to the metropolis through (until recently) two huge tunnels. 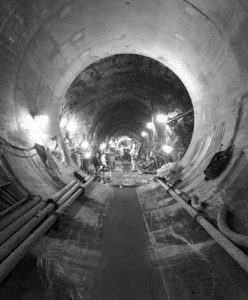 The last time we visited this subject in the BF Blog, New York’s governor was mulling a decision of critical importance to the sustainability of the NYCWS. When Andrew Cuomo’s tenure as governor is complete, his decision to ban fracking within the boundaries of the watershed that serves the city may well be remembered as the most important (and politically courageous) choice he made as NY’s chief executive. Under tremendous pressure to create a bounty of new jobs in a state recovering from the Great Recession, Cuomo wisely opted to take the long view and protect an irreplaceable public resource.

Today, New York City Mayor Bill de Blasio also has a critical choice to make that will impact the long-term safety and viability of the NYCWS. Unfortunately, as revealed by The New York Times this week, the wisdom, courage and long view embraced by Cuomo are nowhere to be found in the mayor’s decision-making process

For more than 50 years, city engineers have been warning that NYC is facing a calamity of biblical proportions (as in water service being cut off to nine million people) if the two aging tunnels that deliver water to the city are not supplemented by a third. When this issue was first raised in the early 1960s, the engineers noted that their inability to close, inspect or repair the two existing tunnels was with every passing day bringing closer the likelihood of a catastrophic breakdown of the system. Only once since Tunnel No. 1 went into service in 1917 and Tunnel No. 2 in 1937 did the city even attempt to inspect the inside of one of the tunnels. They didn’t get very far: in 1954, the engineers tried to temporarily shut Tunnel No. 1, but they had to quickly reverse course and turn the water back on when a giant valve beneath Central Park trembled and began to crack.

City officials recognized they had no choice but to build Tunnel No 3, what would become one of the largest public works projects in U.S. history. Ground was broken in 1970 for the 60-mile tunnel. During the rest of that decade, while NYC teetered on the brink of bankruptcy, work proceeded at a snail’s pace. In the decades that followed, lawsuits, financial crises and other priorities sometimes brought the tunnel construction to a halt (The $1 Billion Tunnel to Nowhere was the title of a New York magazine article published in 1979) or to move along so slowly that completion remained well beyond the horizon of city residents as the 20th century ended.

This all changed when Michael Bloomberg became mayor in 2002. As one of his first acts as mayor, with the city still reeling from the September 11, 2001 terrorist attacks, Mayor Bloomberg asked experts from all city departments to present him with a list of the most catastrophic disasters (terrorist, natural or otherwise) that had the potential to shut down New York City. The mayor was stunned when he saw the results: at the top of nearly every list submitted by dozens of city agencies was a sudden breakdown of one of NYC’s two aging water tunnels.

Mayor Bloomberg immediately made completion of Tunnel No. 3 the top priority for his administration, authorizing hundreds of millions of dollars in annual budget appropriations for the $6-billion project; enacting large increases in city water and sewer taxes to fund these appropriations; and ordering round-the-clock digging of the tunnel and building of the auxiliary systems and facilities needed to support it. Bloomberg set a deadline of 2017 for completion of the project.

Mayor Bloomberg spent more on Tunnel No. 3 than his five predecessors combined. Three shifts a day were assigned to the non-stop work on the tunnel (24 workers died during the construction; scores were injured). Meanwhile, NYC water and sewer rates continued to rise to unprecedented levels, with annual increases averaging eight percent.

Bloomberg’s commitment to the tunnel project paid off in the completion of Tunnel No. 3 ahead of schedule. Shortly after he left office at the end of 2013, water service through the new tunnel began in Manhattan and The Bronx. All that remained of the project was to hook the 60-mile-long tunnel up to Brooklyn and Queens, work that would involve digging two deep shafts (one in each borough). In the last year of Bloomberg’s tenure, $336 million was appropriated to dig the two shafts, which would permit the five million people living in the outer boroughs to receive water through Tunnel No. 3 (also permitting the city to shut down Tunnel No. 2 and repair it). The deadline for completion of the last elements of the Tunnel No. 3 project was set at 2021.

Enter Mayor de Blasio. The Times’ report reveals that, soon after taking office, de Blasio decided to postpone the water tunnel completion work in Brooklyn and Queens. The mayor initially claimed that funding for the Brooklyn-Queens leg of the project had been eliminated by Bloomberg, but de Blasio quickly was forced to admit that he had ordered the tunnel funds to be used for other purposes, primarily to eliminate the need for any further increases in water and sewer taxes.

Mayor de Blasio now says the city intends to finish the remaining portions of the tunnel project “sometime in the 2020s,” but has not set a specific date for completion nor allocated any money in the city budget to carry out the work.

So, for perhaps the next 10 years, New York City’s new $6-billion water tunnel will remain dry in the city’s two largest boroughs—where half the population of the city lives—and the doomsday-scenario clock will keep ticking, bringing the nation’s largest city closer and closer to the inevitable breakdown of Tunnel No. 2.

We hope the mayor changes his mind or has his decision on the remaining tunnel work promptly reversed by the next mayor. But if the water disaster long predicted in New York happens before Tunnel No. 3 is completed, we’ll all know who to blame.