The pharaohs built the Pyramids, the emperor of China built the Great Wall and Babe Ruth didn’t build Yankee Stadium, but he sure made it worth the price of a ticket. Now, the Port Authority of New York and New Jersey has built a $4-billion train station for the World Trade Center. 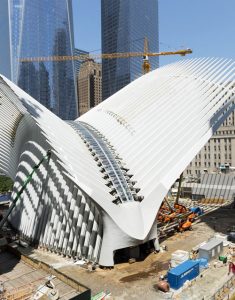 When the designs for the rebuilding of the World Trade Center site were drawn up more than a dozen years ago, city planners embraced what seemed to be a coherent architectural blueprint for an ultra-modern commercial hub surrounding a national memorial dedicated to the victims of the 9/11 attacks, including a museum and memorial pools in the footprints of the original Twin Towers. The centerpiece for the 16-acre WTC development, the portal that was supposed to tie it all together, is the World Trade Center Transportation Hub, an appropriately pedestrian name for a facility that serves as the home of a rebuilt PATH station for commuters riding the trains connecting NYC and New Jersey.

But from the moment he put pen to paper, it’s been clear that architect Santiago Calatrava was aiming for much more than a functional rail hub dressed up in his favorite architectural elements, massive yet delicately balanced white-winged structures in which tons of concrete and steel seem to defy gravity. Calatrava envisioned a vast new public space that would serve as a breathtaking symbol of rebirth and renewal, a place that could instantly transport visitors from underground depths to unimagined heights.

Unfortunately, before the ink was dry on the blueprints for the WTC site, the city’s original plans collided with the interests of a gaggle of stakeholders with competing priorities. For the better part of a decade, armies of lawyers and bureaucrats queued up and mud-wrestled over who would pay for what. Law enforcement agencies weighed in with security concerns they said must override ease-of-access; they convinced the city to put the new World Trade Center tower on an imposing 20-story-high block of concrete, a sad and permanent confirmation of post-9/11 reality that can’t be disguised with miles of reflective glass.

Engineers are still struggling mightily to integrate the transportation hub and new underground warrens for planned retail and shopping outlets. And with a trickle of water in some unexpected places, the Hudson River reminded everyone that the retaining walls of the WTC site (the original Twin Towers were built on landfill that was dumped in the river) needed to be shored up.

As delays mounted, the estimated cost for the WTC project headed for the stratosphere, with no price tag rising higher than the one for Calatrava’s masterpiece. The cost of what was supposed to be a $2-billion transport hub is now expected to exceed $4 billion, with most of the funds coming from steadily increasing tolls the Port Authority has imposed on commuters (it now costs $15 to drive across the George Washington Bridge).

The backlash is building. Critics are loudly pointing out that while New York’s most-used transportation hubs—notably Penn Station and the Port Authority Bus Terminal—are literally rotting, a King’s Ransom in public funds has been lavished on a location that is basically a PATH station connecting to the 18th-busiest subway stop in the city.

They’re cutting the ribbon next week on the most impressive part of Calatrava’s building, so you can decide for yourself whether it was worth it.

Oculus is the Latin word for eye; the central space of the World Trade Center Transportation Hub is an eyeful and then some. Visitors emerge from their trains to find themselves standing on acres of white marble under curved, steel-ribbed walls—the underside of Calatrava’s white dove wings—rising 160 feet toward a ribbon of glass that serves as the main hall’s skylight. Light pours in from the skylight (whose glass panels can be opened) and the sunlight dances down windows between the ribs of the structure. For now, the Port Authority has decided not to clutter up the main hall with anything else, not a single news kiosk, coffee shop or even a bench. Nothing stands between you and the grand vision of a Spanish architect trying his best to transform a landmark of horror into a legacy of rebirth and renewal.

We’ll cut to the chase here and answer the big question. Was it really necessary to build Calatrava’s edifice?

A vast new public space that makes us stop in our tracks, take a deep breath, turn our eyes to the heavens and, on a clear day—the kind of crisp, cloudless and limitless blue sky like the one over New York City on September 11, 2001 before everything changed—forces us to take a moment to ponder all things larger than we are and lets us see the light from above?

Yes, we need something like that. We really need it, now more than ever.