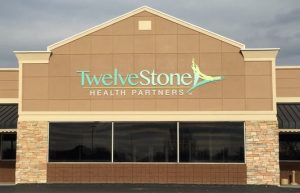 “In Middle Tennessee alone, the healthcare industry contributes an overall economic benefit of nearly $40 billion and more than 250,000 jobs to the local economy each year. Because of companies like TwelveStone Health Partners, that number continues to grow,” said Tennessee Economic and Community Development Commissioner Randy Boyd. “We thank TwelveStone for expanding its presence in Rutherford County and creating valuable jobs for our Team Tennessee workforce.”

“As a fourth generation Tennessee entrepreneur, creating high-value jobs statewide is very important to me,” TwelveStone Health Partners CEO Shane Reeves said. “The mission of TwelveStone Health Partners is very much in line with the Department of Economic and Community Development. We are building a business that will have statewide impact benefiting communities in Chattanooga, Memphis and Knoxville. I appreciate the support we’ve received from TNECD, it is no surprise given the tremendous leadership shown by the state of Tennessee in supporting business.”

TwelveStone will begin construction in mid-March on a new 30,000-square-foot corporate headquarters at Heritage Square in Murfreesboro providing the company with a centralized space for business operations as well as warehouse space. The launch of TwelveStone Health Partners is a result of last year’s acquisition of Reeves-Sain Drug Store, Inc. and EntrustRx, its specialty pharmacy business by Fred’s Inc. TwelveStone will offer packaged medication, infusion and enteral services, respiratory therapy services and durable medication equipment. The company plans to expand its existing 44-county service area footprint to all of Tennessee’s 95 counties.

“We are extremely excited about this opportunity for one of Murfreesboro’s hometown companies,” Murfreesboro Mayor Shane McFarland said. “TwelveStone is a prime example of a business that started in Murfreesboro and through good leadership and management has become a national leader in its industry. We are proud to support both business expansions and new businesses as they continue to make Murfreesboro a great place to do business and provide jobs for our residents.”

“TVA and Murfreesboro Electric Department congratulate TwelveStone on its decision to expand and build a new corporate headquarters in Murfreesboro,” TVA Senior Vice President John Bradley said. “We, along with the city of Murfreesboro, Rutherford County, Rutherford Chamber of Commerce and Tennessee Department of Economic and Community Development, celebrate TwelveStone’s continuing business success and commitment to grow in the Valley.”