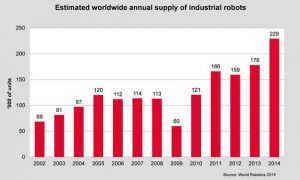 Sen. Marco Rubio is still shaking off the impact of a direct hit from NJ Gov. Chris Christie in last week’s Republican presidential debate, when Christie branded Rubio a “robotic” candidate who repeats the same talking points when answering questions.

We don’t know if this will make Marco feel any better, but—if he is a robot—he’s part of one of the fastest-growing demographic groups among American workers.

There are now more than 260,000 industrial robots working in U.S. factories, according to the Robotics Industries Association (RIA), which tracks the rise of the machines. Orders for robots by North American companies set new records in 2015: 31,464 robots were ordered, valued at a combined $1.8 billion, a 14-percent increase over 2014. Shipments of robots to companies in North America rose 10 percent over 2014 (28,049 units were shipped). According to the RIA, the biggest increase in robot orders came from buyers in the automotive, semiconductor and electronics industries. The trade group says the most popular jobs for these robots included coating and dispensing, material handling and spot welding.

Worldwide, the International Federation of Robotics (IFR) in 2014 reported a 29-percent increase in robot sales totaling 229,261 units. The sales numbers for 2015, still to be released, are expected to top the total number of robots currently deployed in the U.S. The million-robot army now working in plants around the world is growing exponentially: IFR says global sales averaged 115,000 units between 2005 and 2008; the annual average rose to 171,000 between 2010 and 2014; and it will probably top 300,000 by 2018.

Some of the places that are embracing robotics may surprise you. That’s right, we’re talking about China. Everyone knows the world’s most-populous nation became the world’s second-largest economy on the backs of millions of low-cost, poorly paid workers. But the PRC now is feeling the double-barreled crunch of a self-inflicted labor shortage—largely due to the one-child-per-family rule imposed by China’s dictators decades ago (they recently lifted the restriction)—and intense competition from lower-cost producers in Vietnam and other developing nations in Asia.

According to the MIT Technology Review, China is laying the groundwork for a “robot revolution” that will automate the work currently done by millions of low-wage manufacturing workers in the PRC. Nearly a quarter of current worldwide orders for robots are coming from China.

Robots also are poised to move up the industrial food chain; the machines are becoming smarter and more versatile. Industry analysts predict that as early as 2019 robots will be able to work without human invention, essentially taking over the entire manufacturing process. That’s just one of a bevy of advances IFR expects to see before the end of this decade, including:

Here’s the bottom line: within three years, the number of robots installed in factories around the world will double. At the same time, a larger number of human workers will be called into the HR office to hear a familiar refrain.

By 2020, the HR director probably will be a machine. Got a problem with that? Talk to the hand.