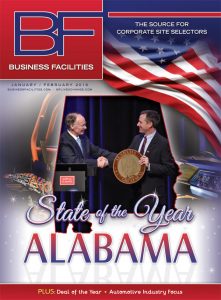 Gold Award: Mega-campus in Houston | Daikin Industries’ Goodman Group is building a 4.1-million square-foot consolidated campus that will integrate manufacturing, offices, distribution and R&D under one roof for the HVAC systems maker.

Bronze Award: Louisiana Lands Formosa | What may be the largest petrochemical complex on Earth will rise on a 1,000-acre greenfield site in Louisiana’s St. James Parish.

Honorable Mentions | BF’s Economic Development Deal of the Year contest attracted a record number of project submissions from across the country, seven of which were singled out for a tip of the hat by our judges.

Good Eats for a Bulging Bottom Line | Recent mega-mergers of major food companies are not slowing the growth of food processing hubs. Pull up a seat at our dinner table and chow down on the hottest foodie locations.

Hitting on All Cylinders | 2015 was recorded as the best year ever for the U.S. auto industry—but can it keep the pedal to the metal in 2016?

Shining on the Sunflower State | With numerous business advantages in place, it’s no wonder Kansas has experienced significant growth and emerged as a business leader in various industry sectors.

The Golden Standard | Renovate America’s HERO program has helped create thousands of local jobs in California while at the same time helping to increase energy efficiency.

Exceeding Expectations | Utah has proven that sometimes predictability is the best thing for business.