The Dow Jones Industrial Average dropped more than 1,400 points in just the first two weeks of 2016, but that volatility appears to be avoiding the commercial real estate industry, especially when it comes to cross-border investment in the United States, according to JLL’s U.S. Investment Outlook.

“While we’re seeing volatility and uncertainty in parts of the financial markets, the relative strength of economic and leasing fundamentals continues to position the United States as an attractive, healthy and transparent market for cross-border investment,” said Steve Collins, International Director and President of JLL Capital Markets – Americas. “This is reinforced by a compressed global yield environment seeing low, or in some cases, negative yields.”

Cross-border transactions increased more than 150 percent year-over-year in 2015 to a record $71.7 billion, according to JLL. That surpasses the 2007 record by more than $30 billion. Foreign partial interests have averaged 27.4 percent over the last five years, nearly double the pace of similar transactions in 2005-2007. 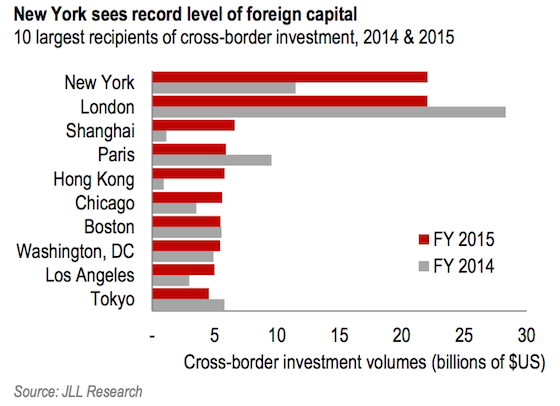 For the first time in history, the industrial sector usurped office as the number one destination for cross-border transactions, accounting for 36.1 percent ($25.9 billion) of total offshore capital. JLL research shows that Asian investors spurred much of that industrial growth. Singapore-based investors accounted for $12.7 billion in offshore capital alone.

However, JLL predicts that as sovereign wealth funds and pension funds continue to pour capital into the U.S. industrial market and syndicate down to minority interests — specifically with portfolio deals — 2016 sales will still be up over 2014, but down from 2015’s record-breaking haul.

While the source remained the same, the destination bucked trends. Investors dug deeper into primary markets and were willing to settle for less than Class A and Trophy assets, which were priced 32 percent higher year over year. As a result, Class B asset acquisitions by foreign buyers increased 7.3 percent over 2014.