Moderate economic growth with low interest rates, punctuated with bouts of pessimism and volatility—the factors that have characterized the world economy for the past few years—are likely to continue in 2016, supporting moderate growth in commercial rents and investment sales volume globally, according to CBRE Group, Inc.’s 2016 Global Real Estate Market Outlook. 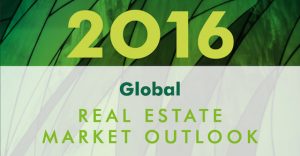 “The current environment of variable but generally improving growth in the developed world, alongside low interest rates and low inflation, is very supportive of consumers and commercial real estate markets,” said Richard Barkham, CBRE’s global chief economist. “There are some risks for sure, including weakening sentiment due to volatile stock markets, rising interest rates in the U.S. and the U.K., financial stress in emerging markets and the slowdown of the Chinese economy. However, because consumers in the U.S., Europe and even China are in good shape, we think the global economy is strong enough to withstand these challenges and that the real estate and economic reality will be better than expected in most places in 2016.”

CBRE expects 2016 to be a year of volatile markets but steady economic growth. Consumers in the U.S., EU and many parts of Asia Pacific are spending gains from rising incomes, low interest rates and low oil prices. This should help support overall global GDP growth, which is expected to come in at 2.6 percent for the year, according to Oxford Economics. There are risks, including the potential for a debt crisis in emerging markets, the further depreciation of the yuan, and continued volatility in global equity markets. In a worst-case scenario, CBRE predicts these occurrences might inhibit economic growth, but should not cause a major recession as interest rates would stay low for longer.

In 2016, global prime rents across the three major property types—office, industrial and retail—are expected to grow 2.2 percent on an annual basis, according to estimates from CBRE’s Global Rent Index. The Americas, thanks to the strength of the U.S. property sector, is expected to see commercial real estate rents rise 3.4 percent in 2016, as consumption growth and rising employment, combined with comparatively limited new supply levels, should simulate demand. Rents in EMEA are forecast to rise by 3.2 percent thanks to a combination of increased consumer spending, pent-up demand for commercial space and anticipated further monetary easing by the European Central Bank. In Asia Pacific, rent growth is expected to be flat, largely due to the region’s economic slowdown and oversupply in some markets.

Global commercial real estate investment markets are expected to remain active in 2016, but the pace of growth is anticipated to slow after six years of recovery and price appreciation. CBRE expects worldwide investment sales volumes to grow by 4 percent in local currency terms in 2016. Low borrowing costs and continued rent growth should continue to make commercial property investment attractive to investors and the “wall of capital” is expected to remain substantial. On balance, there will likely be downward pressure on cap rates, but less strong than recent years due to rising U.S. interest rates and the potential for weaker demand for assets from oil-based economies.

Most U.S. and European office markets are expected to tighten further in 2016 as demand for space is expected to outpace limited new development. However, the extent of tightening in individual cities will largely depend on local job growth in major office-using industries. Asia Pacific office markets will be more mixed as cost-conscious occupiers, grappling with the impact of the region’s economic slowdown, scale back leasing activity amid a surge in new supply in markets in India, China and Indonesia.

Robust demand from e-commerce and third-party logistics companies for warehouse and distribution space will continue to reshape the industrial and logistics market in 2016, predicts CBRE. With e-commerce sales expected to grow 23 percent in 2016, according to eMarketer, demand for modern “big-box” facilities will remain strong. Many logistics users will also seek smaller in-fill industrial facilities within major metros to meet growing consumer expectations for same- and next-day delivery of online orders.