For several decades now, the National Football League has shown a propensity to permit its teams to pack up and move to more lucrative locations (back and forth, in some cases), leaving behind loyal fans and empty stadiums built on a foundation of civic debt. 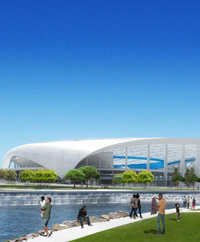 So it shouldn’t come as a surprise that the Lords of the Gridiron also don’t hesitate to pull an end run around someone else’s trademark. Thus we have the unveiling of the new $2.6-billion home of the Los Angeles Rams (currently known as the St. Louis Rams, St. Louis being the city that lured the original Los Angeles Rams to Missouri in 1995 after the St. Louis Cardinals NFL franchise moved to Phoenix and became the Arizona Cardinals, the same year the L.A. Raiders, who originally were the Oakland Raiders, moved back to Oakland, leaving Los Angeles without a professional football team for the first time in nearly 50 years…oh, never mind).

The Rams’ futuristic 80,000-seat stadium—resembling an architectural combination of a grilled-cheese sandwich and the mother ship in the space epic Alien—is set to anchor a new 300-acre entertainment district in L.A. that the owners have proudly dubbed “NFL Disney World.” Asked about royalties, Donald Duck declined to comment, but he did quack something under his breath we can’t repeat.

In order to get the planetary gobs of financing needed for this mega-project to align, the NFL entertained bids from three of its existing football franchises and accepted two of them. So the San Diego Chargers are expected to share the new L.A. stadium with the Rams, leaving football fans in San Diego and St. Louis crying into their hankies, which they no doubt wish were challenge flags. [If the Chargers get cold feet, the NFL says the Raiders have dibs on the second L.A. slot].

We’d point out that this business transaction has little to do with football fans and a whole lot to do with the size of TV markets and broadcast rights, but we don’t want to get hit with a 15-yard penalty for stomping a player after he lost the ball while being tackled by three linebackers and Roger Goodell. We’ve already expended enough pixels in this space decrying the mercenary business tactics of NFL executives who are so tone-deaf they think a team name that doubles as an ethnic slur is a “tradition” that should be carried forward into the 21st century.

So here’s the skinny on the new commercial mega-plex in La-La Land:

The development in the L.A. suburb of Inglewood will build the world’s most expensive sports arena as the “cornerstone” of a sports, music and entertainment district that will be open for business year-round, according to Inglewood Mayor James Butts.

One of the owners of the new complex—who declined to give his name to The Los Angeles Times—compared the development plans to Florida’s Disney World (the Inglewood project’s footprint is twice the size of the original Disneyland in nearby Anaheim). The new complex will include a 6,000-seat performance venue, more than 1.5-million square feet of retail and office space, 2,500 homes (no word on whether tailgating on the driveways will be permitted), a 300-room hotel and 25 acres of parks. The seating capacity of the stadium will expand to more than 100,000 for special events.

The 3.1-million-square-foot multipurpose stadium will be the NFL’s largest in terms of square feet. According to HKS, the architectural firm, the most striking feature on the facility will be a 19-acre transparent plastic canopy that will be draped over the stadium and parts of the surrounding area. The canopy will be made of the same polymers used to build canopies over the Allianz Arena in Munich and the Beijing National Aquatic Center. We’re not sure if this had anything to do with the NFL’s decision on this project, but the canopy over the stadium in Germany can change colors to reflect whichever “home team” among several teams that share the facility happens to be playing that day.

The estimated price tag for the stadium alone is $1.86 billion (some industry analysts predict that could grow to close to $3 billion), surpassing the cost of the NFL’s current most-expensive arena, MetLife Stadium (the $1.6-billion home of the Giants and the Jets). The new stadium is expected to ready in time for the 2019 NFL season; the owners already are bidding to host a Super Bowl as soon as possible after the ribbon is cut. Until the stadium is finished, the Rams will play in their former home, the L.A. Memorial Coliseum, which has twice been the venue for the summer Olympics.

Sadly, the days of family-owned NFL franchises steeped in tradition appear to be coming to an end, replaced by migratory teams drawn into the maw of the hottest markets available, like stars being sucked into one of Stephen Hawking’s black holes in space. In this case, the intersection of football and property development probably was inevitable: the current owner of the Rams, Stan Kroenke, is a property developer who reportedly has a personal net worth of $7.4 billion.

But we’re happy to tell you that at least one storied NFL franchise will not yield to this depressing trend: the Packers, who always have made their home on the frozen tundra of Green Bay, WI (the name originated from Meat Packers), won’t be going anywhere.

A few years ago, when other locations started dropping hints to the owners of the Packers that they’d be happy to give a warm and lucrative embrace to the team, the city fathers of Green Bay took matters into their own hands: they bought the team, selling shares to the residents of Wisconsin’s most famous football town.