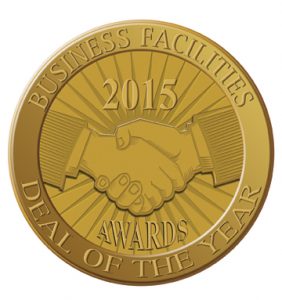 TINTON FALLS, NJ — JAN. 4 — Business Facilities has announced the winners of its 2015 Economic Development Deal of the Year competition.

BF‘s Silver Award went to the South Carolina Department of Commerce for Volvo’s first North American assembly plant, a $500-million facility that will generate 2,000 new jobs over the next 10 years (and up to 4,000 by 2030). Louisiana Economic Development won the Bronze Award for Formosa Petrochemical’s $7-billion complex in St. James Parish.

“The 2015 Economic Development Deal of the Year Awards were our most competitive ever, with 30 project nominations spanning 18 states,” said BF Editor in Chief Jack Rogers. “All of these projects were high-impact developments worthy of consideration for our top awards, so our blue-ribbon panel of judges really had to roll up their sleeves and dig into the details to pick the winners.”

Due to the unprecedented number of big-ticket submissions for the 2015 contest, BF‘s judges also bestowed a record seven Honorable Mention Awards. The recipients include:

Under the code name “Project Superbird,” Daikin’s consolidated corporate campus project spurred a fierce competition between several Gulf Coast and U.S. Southeast locations. According to Goodman Manufacturing Co. President and CEO Takeshi Ebisu, an educated workforce, robust economic growth and a favorable year-long climate tipped the balance in Houston’s favor.  Daikin, headquartered in Osaka, Japan, is a leader in the heating, ventilating and air-conditioning industry. In 2012, it completed a $3.7-billion acquisition of Goodman Global Group, which specializes in the ducted-style residential unitary HVAC segment in the U.S.

The consolidation will involve the relocation of two separate manufacturing operations from Tennessee to Houston. The single, contiguous 4.1-million-square-foot campus will house distribution, manufacturing and R&D operations as well as offices. According to company officials, the Houston facility will be the largest tilt-wall industrial building in the world, second only to Boeing’s aircraft assembly plant in Everett. WA.

“Greater Houston Partnership’s team marshaled an impressive array of suitable sites, tailored incentives and regional data to back up its one-of-a-kind proposal,” Rogers said. “Houston continues to cement its status of one of the most robust growth-oriented metros in the U.S.”

Volvo’s decision to put its first North American automotive plant in Berkeley County, SC vaults the Palmetto State, already the long-time home of BMW’s auto assembly hub, into the top tier of automotive manufacturing leaders in the U.S. The $500-million plant is expected to generate an estimated direct economic impact of $7.5 billion.

The SC plant, which will produce Volvo models for the U.S. and export markets, is part of an ambitious plan by the Swedish auto giant to double global sales.

“With Boeing, BMW and now Volvo assembly facilities, South Carolina has put down a marker that it intends to be a leading player in advanced manufacturing for years to come,” Rogers said.

Taiwan-based Formosa Petrochemical Corp. will build one of the largest chemical complexes in the world on a 1,000-acre site in St. James Parish, bringing 1,200 new jobs to Louisiana. The project is expected generate more than $9 billion in capital spending.

BF congratulates all of the winners of our 2015 Economic Deal of the Year Awards.