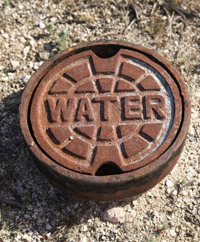 We’ve been predicting in this space that in coming years the availability of water resources will loom large in the mix of top economic development priorities, up there with low-cost electricity and a skilled workforce.

A growing number of locations are beginning to pay attention to the need to start planning today for an ample supply tomorrow of this precious commodity, the abundance of which surely will dwindle as the average global temperature heats up (we’re not talking here about the salt water in the oceans, which will rise, but the fresh water we all require to survive and flourish).

A lot of people are giving lip service to the need to increase water resources, talking the talk about drawing up blueprints for more robust water systems. In Texas, they’re walking the walk: the Lone Star State recently made a $4-billion down-payment on a 50-year-plan that envisions spending at least $27 billion on an elaborate new water system for TX.

In November of 2013, Texas voters approved Proposition 6. Prop 6 created the State Water Implementation Fund for Texas (SWIFT), the first such fund dedicated to implementing an ambitious state water plan that is brimming with projects that will dramatically expand the TX water infrastructure through the rest of this century.

The Texas Water Development Board (TWDB), which oversees the allocation of SWIFT funds, already is moving full-speed-ahead with the first installment of the 50-year plan. Earlier this year, it quickly approved about $4 billion in financing for dozens of projects to increase water supplies in the Lone Star State, including several water conservation initiatives. The board has been praised by environmental groups in Texas for embracing every conservation project that sought state help, an endorsement they hope will prompt more local water utilities to tap into SWIFT for their projects.

The TWDB gave the green light to 32 water-related projects, ranging from new transmission pipelines to full-scale desalination plants [the state water plan envisions TX getting a significant percentage of its potable water from desalinated Gulf Coast seawater in coming decades]. The initial $4-billion allocation will cover public funding for water projects for the next 10 years; nearly $1 billion is expected to be spent by the end of next year, most of it in low-interest loans bestowed on communities large (the Greater Houston Metro Area) and small (the town of Marfa had its project approved).

Proposition 6 created an initial SWIFT fund of $2 billion, which the TWBD expects to leverage into a total of $27 billion in financing over the next 50 years to implement the state water plan, with about half of that coming from state financial assistance. State officials said TWDB was able to approve a large number of projects in the first round because a majority of entities applying for funds requested long-term financing, which enabled the board to stretch the available funds. TWBD allocates funding for water projects based on a ranking system it developed that takes into account the length of time it will take to implement a project and the overall long-term improvement the project represents. For example, a seawater desalination plant proposed by the Guadalupe-Blanco River Authority received seed funds from TWDB even though it will take much longer to build than other, higher-priority projects. TWDB must by law spend up to 20 percent of Prop 6 funds in the next five years on water conservation or re-use projects.

This year’s allocations fell short of that goal, but only because only three projects were proposed (all were approved by the board). Conservation efforts are expected to get a boost in the next update of the state water plan in 2017 (the plan is updated every five years). We congratulate the Lone Star State for an impressively swift (pun intended) start on the implementation of its forward-thinking TX water plan, and we encourage the TWDB to keep the funding spigots open for new water infrastructure projects. Our friends in Texas have created a model that should be emulated in increasingly arid regions throughout the U.S.