Home » Economic Development » Norway Most Prosperous, Singapore Most Successful Economy In The World

Norway comes out on top due to the freedom it offers its citizens, the quality of its healthcare system, and social bonds between its people. Also among the top five most prosperous countries are Switzerland, Denmark, New Zealand, and Sweden. 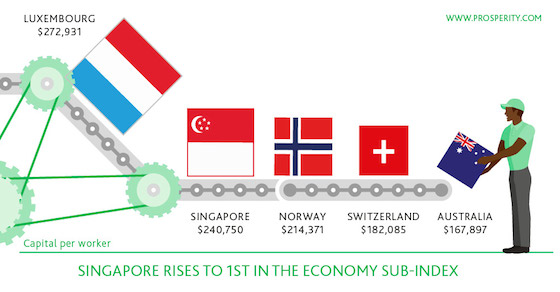 “The Prosperity Index tells us that human progress goes beyond economics,” said Nathan Gamester, Director of the Prosperity Index at the Legatum Institute. “Norway and other countries at the top of the Index provide opportunity and freedom to their citizens, access to quality healthcare and education, and provide safe environments for people to flourish in.”

Economically, Singapore is the most successful country in the world, according to the Index. This year Singapore ranks first on the economy sub-index. It boasts the second highest capital per worker in the world at $240,750 per worker, and 47% of the country’s manufactured exports are classified as “high-tech,” the third highest in the world.

“By contrast those countries or regions of the world where people feel unsafe, where they are forced to flee from their homes, and where the education and healthcare systems are failing do not provide prosperity to their citizens,” added Gamester. “Sadly this year the Prosperity Index reveals that the world is becoming an increasingly dangerous place. A dramatic decline in Safety & Security in Africa and the Middle East threatens to undermine prosperity across the world. Many European countries are still struggling to grapple with unemployment. The Prosperity Index shows that the world is becoming more prosperous, but ominous developments suggest that this cannot be taken for granted.”

The report also found that:

To access the full report, data, and analysis, visit www.prosperity.com.