By the BF Staff
From the September/October 2015 Issue

Seven regions across the state have submitted formal applications for the Indiana Regional Cities Initiative, which will be eligible for review by the Strategic Review Committee for state matching funds. Together, these plans total more than $3.78 billion in public/private investments for more than 400 cultural and livability projects in Indiana.

Spearheaded by Gov. Mike Pence, the Indiana Regional Cities Initiative sets a framework for neighboring communities across the state to work together to develop regional visions that are supported by compelling strategic plans focused on quality of place. The initiative will help each region develop a positive and unique national brand to advance the goal of becoming a destination for talent. The initiative is overseen by the Indiana Economic Development Corporation.

The regions that submitted Regional Cities Initiative applications are:

The Strategic Review Committee will hold several meetings over the coming months to determine the review method and to evaluate submitted applications before making formal recommendations for funding to the IEDC Board of Directors during the fourth quarter.

Hoosier Energy, in partnership with its local REMCs, provides affordable, abundant power throughout Southern Indiana. Beyond being an electric utility, Hoosier Energy leverages its capabilities to stimulate business investments, to create jobs, and to make their communities better places to live. That’s “positive energy.”

Hoosier Energy services Central and Southern Indiana, plus Southeastern Illinois, where it delivers wholesale power to 18 member distribution cooperatives (REMCs). The cooperatives serve a region rich in agricultural tradition, with numerous clusters of logistics and manufacturing facilities that have been growing for decades. A robust utility and transportation infrastructure enhances production and transportation of goods in all parts of the service territory.

A key part of Hoosier Energy’s success is helping their partner REMCs remain connected to their local economic development groups in communities scattered through the region. Together, the utilities participate in business negotiations from the start to determine how the utility can “sweeten the deal” when needed. This process also helps the utility anticipate future power needs.

Hoosier Energy continues to construct a power generation fleet with sufficient capacity to meet the needs of future business expansion. In addition to power availability, communities rely on Hoosier Energy and the local cooperatives to maintain shovel ready sites that are also power-ready sites. This approach has helped attract and retain numerous business growth opportunities.

The transportation infrastructure running through Southern Indiana is an advantage for any company. Indiana is a one-day drive to 80 percent of the United States. Indiana has over 11,000 miles of highway, intersected by eight interstate highways, plus over 4,400 miles of active railway tracks. 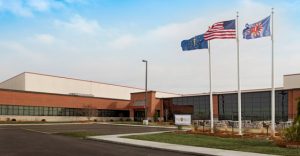 Hoosier Energy has done its part to cultivate tremendous growth in food production. In 2013, Farbest Foods opened a new processing plant in Knox County, creating a 227,000-square-foot processing plant and investing over $100 million to create 300 new jobs. Hoosier Energy worked alongside other utilities to address unique challenges, such as the plant’s fresh water usage in excess of 800,000 gallons a day.

Sugar Creek Packing, another major food manufacturer, expanded to Wayne County in 2012 and doubled an existing facility. Since then, Sugar Creek’s facility has expanded in increments, and will be at 400,000 square feet by the end of the year. Hoosier Energy invested $1 million to build a new substation to meet their expanding energy needs.

South of Indianapolis, Johnson County supports thriving warehouse districts in Greenwood and Franklin along I-65, including Cooper Tire, Arbonne International, and Celadon Logistics. ULTA Cosmetic Company recently constructed a new warehouse in Greenwood. The time from announcement to opening was less than a year. Anticipating ULTA’s power needs, Hoosier Energy upgraded one of the substations in the industrial park. Meanwhile, frozen foods distributor Interstate Warehouse has expanded its state-of-the art facility six times. Hoosier Energy met and exceeded their power needs on each occasion.

Southwest of Indianapolis is Morgan County, home to TOA, Inc.’s only U.S.-based plant. TOA is a Japanese-based tier-1 parts manufacturer. Since 2013, TOA has invested in five major facility expansions. The investments total over $126M, adding over 500,000 square feet in new and expanded construction while adding 320 new jobs. TOA is also retrofitting lighting and equipment in their existing facilities. Open communication has been the key to ensuring the South Central REMC stays on top of TOA’s ever-changing electricity needs.

In Columbus, IN, the community is experiencing incredible growth in automotive manufacturing. Cummins, Inc, a Fortune 200 diesel engine company with its world headquarters in Columbus, recently opened a new Logistics Center with an investment of $15 million to build 428,000 square feet of consolidated storage. Cummins also expanded an engine plant in neighboring Seymour, IN.

Toyota Industrial Equipment Manufacturing, the number one manufacturer of forklifts in North America, has also expanded its Columbus facility in the last couple of years. With a campus over 1 million square feet, Toyota announced last month an additional investment of $16 million in new employee facilities.

Global auto parts manufacturer Faurecia also began construction earlier this summer on a new $90 million, 469,000-square-foot, creating 131 new jobs. Faurecia was already the third largest industrial employer in Columbus. Though the news hit fast, the local REMC acted faster to meet the company’s needs even before the expansion is complete.

In just the last couple years, Hoosier Energy and their REMCs have been a major factor in stimulating 31 development projects in which new and expanding businesses have invested $187 million and created over 800 new jobs. That’s positive energy!

PROGRESS AND PLACEMAKING IN HARRISON COUNTY

Steve Smith, President of Fred Smith Store Fixtures Inc. has proven that he is pleased with what Harrison County has to offer by expanding operations in Harrison County. Fred Smith Store Fixtures currently employs 140 people in its Depauw, Indiana location and has recently broken ground, moving at a rapid pace to build a second Harrison County plant, a 70,000 square foot facility in the Harrison County Industrial Park. The manufacturer focuses on providing high-pressure laminate and low-pressure laminate parts and is a major supplier for manufacturers of hotel and office furniture. The expansion will provide at least 40 new jobs by 2018.

Smith Store Fixtures has been a quiet economic driver for Harrison County for over 50 years. “When we considered building a new facility, two main factors came to mind,” Smith said. “The first is the workforce. Our people are what have gotten us here today, and we knew we wanted to stick with the workforce available in Southern Indiana.”

“The second factor is logistics,” he said. “Fred Smith Store Fixtures has operated in a rural setting for 51 years. It’s important to improve logistics to better serve customers. We needed to make sure the two plants could easily work together, and building in the Harrison County (Business) Park in Corydon allows us to meet our needs.”

Just across I-64, another Harrison County project is in motion. The construction of Trilogy Health Services LLC’s 55,000 square foot assisted living and skilled nursing center along with 10 independent living villas is underway and is scheduled to be complete by mid-2016. Trilogy, which operates nearly 50 facilities in Indiana, had “been looking for a place to build in Harrison County for a while now,” said Leslie Knox, the company’s Assistant Vice President of Communications and Creative Services. The new business is expected to create 110 new jobs for the county.

These recent developments give Harrison County residents new opportunities for employment and for recreation. Just 20 minutes from Louisville, KY, our community has been among Indiana’s fastest growing counties since 1975 and the Progress and Placemaking is certain to continue for years to come!