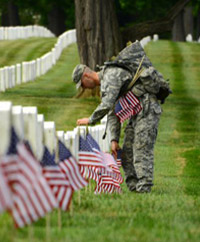 On Veteran’s Day, we all pause to remember those who made the ultimate sacrifice to protect our liberty and to thank everyone in uniform for their service. Unfortunately, if we also take a moment to consider how we’re treating our wounded warriors, we’ll need to bow our heads in shame.

The national disgrace that goes under the rubric of the Veterans Administration doesn’t seem to be getting better. In fact, it may be getting worse.

As this is being written, the VA’s own inspector general’s office has confirmed these appalling statistics: the VA appears to have mismanaged the health records of nearly a million veterans; about 900,000 veterans are still waiting to get on the VA’s backlog for health services; and—brace yourself—as many as 300,000 veterans may have died awaiting access to health services they were promised but never received.

Any cynics out there who assume that since the U.S. has ended its combat roles in Iraq and Afghanistan attrition eventually will whittle this problem down need to consider another shocking number: of the 2.5 million U.S. soldiers who served in Iraq and Afghanistan, about 300,000 returned with traumatic brain injuries.

If you think last year’s scandal—when nightmare descriptions of false records and long wait times at the VA were aired during public Congressional hearings—resulted in long-overdue reforms at the VA, think again. Yes, Congress ordered a sweeping overhaul of the VA’s records management system, but the order came with an asterisk: the small print says creating a new system to clean up today’s mess could take years.

“The VA’s Health Eligibility Center has not effectively managed its business processes to ensure the consistent creation and maintenance of essential data. Due to the amount and age of the ES (enrollment system) data, as well as lead times required to develop and implement software solutions, a multiyear project management plan is needed to address the accuracy of pending ES records and improve the usefulness of ES data,” Halliday says in her report.

While they’re busy not fixing this problem, Inspector Halliday and all 535 members of the United States Congress should take a stroll over to the World War II monument on the National Mall. Here are a couple of examples they could absorb about our nation’s capacity to rise to the challenge of an overwhelming crisis that threatens our way of life:

— When World War II started in 1939, the United States Army only had 187,893 active-duty soldiers, a force about the size of Portugal’s army and only slightly bigger than Bulgaria’s. When the war ended in 1945, the U.S. had 8.3 million active-duty soldiers in uniform.

— Between 1939 and 1945, U.S. factories produced 296,000 warplanes, 86,000 tanks, 64,000 landing ships, 6,000 navy vessels, millions of guns, billions of bullets and hundreds of thousands of trucks and jeeps. U.S. production alone exceeded the combined production of Germany, Japan and Italy, the Axis powers we defeated.

The backlog at the VA will not take years to fix if the American people decide that the despicable treatment of our wounded veterans—or, more accurately, the lack of treatment—is a national crisis that threatens our way of life.