While world leaders prepare to head for Paris in December to try to cobble out what everyone now seems to agree is a last-chance international treaty to combat climate change, the hill they’ll be trying to climb keeps getting bigger 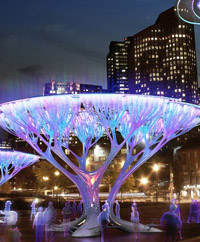 The consensus among scientists is that the overriding goal of the upcoming U.N.-hosted summit is to keep the rise in average global temperatures from exceeding 3.6 degrees F., generally believed to be the tipping point beyond which climate change is irreversible. We may be more than two-thirds of the way to that threshold (some believe we’re already there); the U.S. National Oceanic and Atmospheric Administration, which tracks this stuff, is predicting that this summer will produce the hottest average temperatures ever recorded on Earth.

Unfortunately, the proposals that are being sent to the Paris negotiating table already look like too little, too late.

The experts say that, cumulatively, the nations of the world currently are spewing about 35 gigatons per year of carbon dioxide into the atmosphere. They also believe we must globally limit CO2 emissions to a total of 765 gigatons between now and 2030 to have any chance of avoiding (or at least postponing) the critical global warming threshold. Here’s the problem: the publicly stated carbon-reduction commitments from the world’s largest emitters—from which they’ll try to produce an international treaty in Paris—already bust the 2030 “carbon budget” (see chart, below). For example, the heralded “breakthrough” agreement with China actually allows the PRC (the world’s largest CO2 emitter) to keep increasing its emissions for another 10 years before the big push to reduce them.

We predicted a while ago in this space that, regardless of the outcome in Paris, the battle against climate change soon will spawn a new industry: geoengineering, a catchphrase for a variety of schemes to capture and remove carbon dioxide from the atmosphere. We’ve detailed the collapse of the first government-sponsored geoengineering initiative, which planned for large-scale carbon sequestration (capturing carbon emissions from power plants and burying them in old salt mines), due to prohibitive costs. We’ve also told you about far-out proposals, including spaced-based mirrors to deflect sunlight (offsetting the greenhouse effect of carbon dioxide or methane emissions) and a legion of high-atmosphere carbon-sucking “straws” attached to ground-level vacuums.

Now the entrepreneurs and university labs are getting into the act. The latest “miracle cure” for the big CO2 problem is a new technology said to be able to extract carbon from the air and condense it into fibers that could be used as building materials or to produce components for electronics, cars, clothing and other manufactured goods.

Arizona State University‘s Center for Negative Carbon Emissions reportedly is developing a machine that can pull CO2 out of thin air. The prototype looks like a big box with a mast and sails attached to it. The “sails” of this structure are made of plastic resins said to be capable of grabbing CO2 and holding it. The CO2 binds to the resin when the material is dry and later can be “harvested” for storage by making it wet. A Massachusetts-based urban design group, SHIFTBoston, already has plans to use ASU’s carbon-scrubbing resin to create what it’s calling Boston Treepods, synthetic, tree-shaped solar-powered devices (rendering above) that would remove CO2 from the air and provide light at night while they decorate the streets and parks of Boston.

Our friends in Beantown probably won’t want to hear this, but the folks in New York City already have beat them to the punch with a tree-shaped carbon solution that isn’t made of plastic.

Two years ahead of schedule, New York has finished planting 1 million new trees across the city. The Million Trees NYC initiative, launched by former Mayor Michael Bloomberg in 2007, is the largest urban tree-planting program in the world; it’s increased the tree population of NYC by 20 percent (and that’s above the number of trees that existed before the devastation of Superstorm Sandy).

Kudos to NYC for setting this example and doing it with style: the one-millionth tree in the city’s program—a laceback elm that is eight years old, 25 feet tall and weighs 6,500 pounds—was installed in Joyce Kilmer Park in the South Bronx this month. The park is named for the poet who wrote the poem “Trees.”

Mature trees are nature’s proven way of storing carbon dioxide and they reduce ground temperatures by providing shade. Sure, even a million new trees in a city as large as New York won’t make much of a dent in the world’s growing cloud of carbon emissions. But if the folks in South America and Southeast Asia are inspired by this effort to replant the 1 billion trees that have been chopped down in the world’s remaining rain forests, a measurable blow against the onslaught of climate change can be struck.

Just remember not to burn the leaves after you rake them up in the fall.