It’s the silly season again, when politicians compete for our votes at the same time youngsters in costumes go door to door looking for Halloween treats. We’ll let you decide which is scarier, the teenager whose zombie get-up is way too realistic or the guy with the orange hair who wants to replicate the Great Wall of China 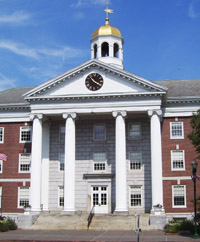 Our quadrennial presidential gladiator joust is well under way; the gaggle of White House wannabes is busy prepping for their next prime-time debate. We know—you already don’t want to hear another word about that. But before you cover your ears and close your eyes, give us a minute to tell you about a debate at the local level that’s worth listening to, especially if you have an interest in economic development trends.

The candidates for mayor of Auburn, NY, a hamlet in the upstate Finger Lakes district of the Empire State, squared off at Auburn’s Hilton Garden Inn recently. The incumbent, Michael Quill, and his challenger, Timothy Lattimore, are quite familiar with each other: Mayor Quill is seeking a third term after unseating Mayor Lattimore in 2007 and fending off a second challenge from Lattimore in 2011.

The debate—organized through Cayuga County’s monthly Wednesday Morning Roundtable and moderated by another former mayor, Guy Cosentino—focused on the candidates’ differing strategies for economic development. [Eerily, the debate took place on Back to the Future Day (Marty McFly set the Delorean’s timer for Oct. 21, 2015). The clock on Auburn’s City Hall, pictured above, bears a striking resemblance to the one made famous in the film.]

As reported by auburnpub.com (website of The Citizen newspaper), both candidates emphasized job creation as essential to a community with a youthful population base. Lattimore, currently vice-chairman of the Cayuga County Legislature, made the case for bringing large-scale manufacturing plants and renewable energy projects to the Auburn area.

“Anything we can do to promote tourism is great, but we do need manufacturing jobs. This whole system was built on 40 or 50 good industries paying into the overhead of running the city,” he said, as reported by auburnpub.

Lattimore cited as an example the announcement earlier this month by Gov. Andrew Cuomo of a new $700-million solar wafer manufacturing plant that is expected to bring up to 1,000 new jobs to Batavia, NY during the next five years. [The high-tech firm 1366 Technologies will occupy a 130,000-square-foot facility at the Western New York Science Technology Advanced Manufacturing Park in Genessee County; the deal was sealed with $56.3 million in state incentives.]

Mayor Quill countered that Auburn should “reinvent” itself rather than betting on a revival of its past glory as a manufacturing hub. “Mr. Lattimore is correct, we had 40, 50 factories and businesses in the area doing a great job when we were all kids or younger. A lot of them are gone,” he said, as reported in auburnpub. “When they leave, the trouble is it’s like a big vacuum. How do we plug this vacuum up? Let’s keep reinventing ourselves.”

The incumbent also argued that tourism should not be downplayed as a driver of economic growth. Quill cited anticipated revenue from the development of the Harriet Tubman National Park, expansion of existing amenities for tourists and plans for a new performing arts center.

[In December, President Obama signed into law a measure creating a national park at the historic Harriet Tubman Home in Auburn. Congress has allocated $6.7 million to develop two parks honoring the leader of the Underground Railroad, one in Cayuga County and the other at her birthplace on the Eastern Shore of Maryland. Tubman is buried in an Auburn cemetery. The new national historical park in Cayuga County will include Tubman’s former home (now being renovated) and related properties on 32 acres along Auburn’s South Street and in the town of Fleming. The properties include the Tubman Home for the Aged and the Thompson Memorial AME Zion Church and Rectory.]

We’re not going to tell Auburn’s voters whether they should give Mayor Quinn a three-peat or make the third time the charm for former Mayor Lattimore. And we’ll make their choice even harder by telling them both candidates are right:

Yes, Mayor Quinn, tourism is an economic driver in the beautiful Finger Lakes region and yes, large-scale old-line manufacturing is not going to suddenly reappear, and yes, every community needs to reinvent itself in today’s ultra-competitive market.

Yes, Mayor Lattimore, luring new high-tech growth sectors with scores of high-wage 21st-century jobs is a great way for Auburn to reinvent itself.

Perhaps these two long-time jousting partners can agree to put two chairs behind the desk at City Hall and call themselves co-mayors, with Mayor Cosentino filling in when they take a day off. The town seems to have a surplus of mayors—might as well put them all to work.

Should a community choose between promoting tourism and manufacturing as a growth strategy?