By the BF Staff
From the September/October 2015 Issue 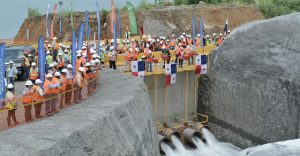 The new locks at the Pacific end of the Panama Canal began to fill with water in late June in preparation for months of testing of their new gates before they open to commercial traffic next April. The flooding of the Pacific locks, following that of the Atlantic locks earlier in the month, puts the $5.25-billion canal expansion project on track with the revised timetable for completion that was established last year, according to a report in the Journal of Commerce.

Jorge Quijano, the Panama Canal Authority’s administrator, told the JOC that the Canal operators expect to grab back most, if not all, of the shipping lost to the Suez Canal by the delays in completing the Panama project and opening the Isthmus to post-Panamax vessel capacity.

Historically, U.S. West Coast ports have been the Panama Canal’s main competitor for Asian cargo moving to the eastern half of the U.S., but the Suez Canal became a larger player in recent years as carriers cut costs by shifting a lot of volume moving to the East Coast onto larger, more fuel-efficient container ships that couldn’t transit the Panama Canal. This will change dramatically when the expanded Panama Canal is ready for business in April.

The canal authority will increase its tolls on all vessel sectors when the new locks open, but it will introduce a loyalty program for ocean carriers that are frequent users of the canal, according to JOC. The authority also will take more risk with container lines because it will charge less for ships that aren’t fully loaded. Although the Panama Canal tolls are slightly higher than those of Suez, the overall cost of the all-water route from Asia to the East Coast is much lower. The round-trip transit time is said to be 10 days shorter via Panama.

Quijano told JOC he doesn’t perceive the proposed canal through Nicaragua as a realistic competitor. A privately owned Hong Kong-based company has signed an agreement with the Nicaraguan government to build a 173-mile canal at a cost it estimates at $40 billion.

The Panama Canal authority hasn’t decided about building a fourth set of locks that could handle the kind of ships with capacities of more than 14,000 TEUs that would be able to transit the proposed Nicaragua canal, but not the new Panama locks.

The Port of Vancouver USA in Southwest Washington has abundant property ready for development with a lot of room for growth. The port currently occupies a total of 2,127 acres, including more than 800 acres of developed, operating industrial and marine facilities and 600+ acres available for future development. Coupled with its new industrial park property, prime location and rail expansion project currently underway, the port is a very attractive option for companies looking to expand or relocate to the Pacific Northwest.

The port’s 108-acre Centennial Industrial Park (CIP) features 58 acres that are now ready-to-build and available for sale or lease. It also has an adjacent 50 acres available for future development, ideal for light industry, advanced manufacturing and supply-chain support. Infrastructure improvements already have taken place at the site, including final site preparation, underground utilities, roads and sidewalks, and a state-of-the-art stormwater management system. These improvements were made possible thanks to a $5.7 million grant through Washington’s 2012 Jobs Now Act that was intended to help generate jobs.

Especially significant in today’s economy is the port’s ability to help prospective tenants think outside the box when it comes to finding funding sources for project development. One example of a creative approach to funding is utilization of the federal New Markets Tax Credit Program, which was instrumental in attracting Farwest Steel, one of the leading distributors, processors and fabricators of specialty steel products in the Northwest, to the port.

In addition to CIP, the Port of Vancouver USA has over three million square feet of warehouse and industrial space, and has made substantial investments in leading-edge facilities.

The Port of Vancouver USA is nearing completion of the West Vancouver Freight Access Project, a $275 million rail infrastructure improvement project that will improve the movement of freight through the port and along railroad mainlines that connect the Pacific Northwest to major rail hubs in the U.S. and Canada. It significantly increases the port’s capacity to handle additional rail cars each year so goods can move more quickly to market, and lowers costs for U.S. manufacturers, making them more globally competitive.

Clark County, home of the port, has low taxes and offers workers and their families all the advantages of a major metropolitan city: outstanding livability, access to affordable housing, cultural and recreational opportunities and quality school options for primary, secondary and higher education.

Site selectors look at how well various areas can accommodate their logistics needs when planning expansions or new development projects. Combined with Washington State’s highly skilled labor force and progressive business climate, the Port of Vancouver USA has the assets tenants need to grow and thrive. For more information, visit www.portvanusa.com or call Mike Schiller at (360) 693-3611.

Situated centrally in the Western Hemisphere and Eastern Time Zone, Greater Fort Lauderdale provides an appealing location for companies seeking to serve North and South American markets, as well as Europe and Africa.

The area is also closely tied to the development of trade and trade gateways. “By taking advantage of the benefits offered by our Foreign-Trade Zone, businesses operate on a more level playing field with their international competitors to increase their profitability,” said City of Fort Lauderdale Mayor Jack Seiler.

For example, Fort Lauderdale’s foreign trade zone offers numerous benefits to businesses, including duty deferral or elimination and increased efficiency, as well as several location options. Zone designation can be assigned to existing or new businesses located within Broward County, or to those that relocate to Fort Lauderdale Executive Airport’s 200-acre Industrial Park.

“Port Everglades has embarked on several cargo-related expansion projects in recent months, making us even stronger as a location for global trade,” said Port Director Steve Cernak. “A new Intermodal Container Transfer Facility is making it possible for cargo containers to be directly transferred between ships and railcars, and our port is working with the U.S. Army Corps of Engineers to deepen and widen our navigational channels to accommodate larger ships.”

Bob Swindell, President and CEO of the Greater Fort Lauderdale Alliance, the area’s public/private partnership for economic development said, “A large pool of talented workers, an inviting quality of life and a competitive tax climate make Greater Fort Lauderdale one of the world’s most attractive business locations for companies of all sizes. It’s a warm and welcoming region where life is less taxing—for many reasons.”

Two recent company relocations and expansions in Greater Fort Lauderdale include SeaLand, a shipping company which announced it would locate its corporate headquarters in Miramar, creating 65 jobs and making a capital investment of $350,000; and Chiquita Brands International Inc., which is moving the headquarters of its banana division to Dania Beach from Charlotte, North Carolina, and creating approximately 80 jobs. Proximity to shipping lanes through Port Everglades was a driver in Chiquita’s move.

Companies interested in information about Greater Fort Lauderdale, or office/site location assistance, are invited to contact Pierre Taschereau at ptaschereau@gflalliance.org.

The 1,403 acres that compose the West Complex (formerly Rough and Ready Island) was transferred from the U.S. Navy to the port in 2001 increasing the size of the port to more than 2,000 acres. Since the transfer of the land, the port has invested more than $80 million in infrastructure upgrades (docks, roads, bridges, and utilities) to expand its industrial capabilities and services, and incent industrial oriented companies to locate their businesses at the port. This upgrade and expansion translates into millions of dollars of savings for new development projects.

The port is uniquely zoned. The PT zoning designation only exists for the port, whereby most industrial uses are by-right (no discretionary action required by the city).

Originally completed in 2004, the port spent more than two million dollars on a Programmatic EIR to address build out of the West Complex. There are large brown field and green field parcels available for development. In most cases, the EIR baseline information can be augmented to address new projects at a minimal cost and reduced time frame. The port’s Board of Port Commissioners is the lead agency for CEQA processing and approval.

In 2009, the port invested more than five million dollars on the installation of a new 60kV substation. The new substation has a 25MW capacity expandable to 50MW when needed. The port is the Municipal Electric Utility on the West Complex.

There is $2 million-plus annual budget for ongoing security at the port. The majority of the West Complex is limited access only, with 24-hour armed security, perimeter fencing and CCTV.

The port is grantee of FTZ #231 consisting of more than 4,000 designated acres for FTZ uses. The FTZ can reduce or eliminate the duty on many imported and exported goods and materials.

The port is served by both Class 1 railroads (BNSF and UP) with local traffic managed by the Central California Traction Company. The port has been improving and adding rail since 2001 and has more than 90 miles of operating track.

A 700 Classification infrastructure project will rehabilitate East Complex Rail Yard, which consisted of nine tracks, and bring the complex back to full capacity. This project, scheduled to be completed in December, will add 4,000-foot long tracks next to the existing 4,000-foot tracks.

The BNSF Mainline Underpass project, to be completed in January, will build a new underpass structure to accommodate a future four-lane roadway and provide PUC vertical clearance; the project also will construct an additional mainline for the Burlington Northern Santa Fe (BNSF)/Amtrak share track.