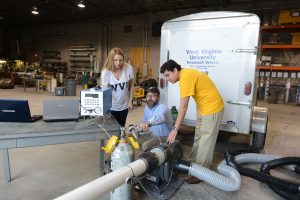 Fifty years ago, an unknown young lawyer named Ralph Nader brought together a handful of engineering grad students and took a close look at one of the most popular vehicles produced by the world’s largest automaker.

Nader’s team discovered that—due to its “sporty” swing-axle suspension design—General Motors’ ubiquitous Chevy Corvair subcompact had an unfortunate tendency to roll over when navigating gentle curves at speeds as low as 15 m.p.h. Nader’s 1965 bestseller, Unsafe at Any Speed, forced Detroit’s Big Three to elevate safety to the top of the list of automotive design imperatives.

You can draw a straight line from just about every vehicle safety feature we now take for granted—from simple stuff like padded dashboards to life-saving airbags—directly back to the gauntlet thrown down by the man who emerged as America’s tireless consumer advocate. Unsafe at Any Speed (along with Rachel Carson’s 1963 book Silent Spring, which led to a ban on the use of the pesticide DDT in agriculture) spawned the modern consumer protection movement.

We don’t know if Ralph’s seminal whistleblowing work was translated into German, but we’re certain this week the folks at Volkswagen wish they’d absorbed its lesson: it doesn’t matter how big you are among industrial giants, if you do something really careless when you engineer a product you’re selling worldwide, you’ll trip and fall.

As this is being written, VW appears to have blown right past “careless,” roared through the stop sign marked “deliberate” and may have sailed off the cliff called “criminal.” The German automaker—having its best year ever and just weeks ago named the top-selling automotive brand in the world—stands accused of rigging its diesel engines with software designed to foil emissions tests.

The dirty little secret that may render VW’s reputation kaput is that the automaker’s “clean diesels”—which promised more torque than gasoline-powered engines, excellent fuel economy and low emissions—actually are filthy. “Cheater chips” in the engines produce acceptable emissions levels when the cars are idling during inspections, but the engines spew out up to 40 times more prohibited pollutants when they’re running on the road. Das Auto ist das fraud and ist in violation of der Clean Air Act in der United States.

VW’s free-fall in the handful of days since the U.S. Environmental Protection Agency publicly confirmed suspicions about the so-called clean diesel already is spectacular: its CEO has resigned in disgrace; it faces a looming recall potentially involving more than 11 million vehicles (half of the cars VW sells in Europe are diesels); its share price has plunged by more than a third; early estimates of its liability top $18 billion; and criminal investigations of VW have begun on two continents.

But here’s where the story really gets interesting: history—the David vs. Goliath battle between Nader’s tiny team and General Motors—is repeating itself a half-century later in VW’s debacle. This time, the “David” team consists of a research professor, two graduate students and a faculty member from West Virginia University.

Daniel Carder is a 45-year-old West Virginia University engineering professor who also is interim director of WVU’s Center for Alternative Fuels, Engines and Emissions, based in Morgantown, WV. In 2012, Carder organized a five-member engineering team to undertake a $50,000 study funded by a grant from the non-profit International Council on Clean Transportation (ICCT). The ICCT’s research contract to Carder’s team was initiated after separate findings by the European Commission’s Joint Research Centre, which showed a discrepancy between test results and real-world performance in European diesel engines.

Carder’s team conducted road tests of several Volkswagen and BMW vehicles by driving them up the West Coast from Los Angeles to Seattle. The discrepancies they found between emissions in VW diesel models during standard inspections and the emissions registered during their road tests was so great that team members got back behind the wheel of the Volkswagens and drove them another 200 miles just to make sure, Carder told Reuters.

When the WVU study was completed in May 2013, the results were forwarded to the U.S. EPA and the California Air Resources Board (CARB), but Carder’s team didn’t stop there: they presented the data at a public forum and were questioned by Volkswagen officials.

In the movie version of this story, this is the scene where a bigwig from VW calls the Fatherland and snorts into the phone something about “das hillbillies from Vest Virginia!” and everyone roars with laughter and merrily heads to the nearest bauhaus for a round of pilsner. The next scene involves a low-level EPA staffer who accidentally puts the WVU study into a higher-up’s “out” basket, where it remains undiscovered for two years.

Until this week, when the real-life EPA and CARB detonated a megaton-sized regulatory finding on Volkswagen.

Here’s where the story gets even better: if our usually meticulous friends from Deutschland had bothered to look into WVU’s track record—and Prof. Carder’s experience in particular—they probably wouldn’t have been so dismissive of the data generated by the team from Morgantown. More than 15 years ago, the first technology to measure vehicle emissions on the road was invented—you guessed it—at West Virginia University.

A 15-member WVU team pioneered portable emissions testing on behalf of the U.S. Department of Justice, which had accused Caterpillar Inc. and Cummins Engine Co. of installing “defeat devices” in their heavy-duty diesel engines, enabling the engines to pass EPA emissions tests and then resume spewing smog back on the road. Confronted with data from WVU’s tests in 1998, Caterpillar and Cummins quietly agreed to pay $83.4 million in civil penalties.

Memo to Steven Spielberg: The 15-member WVU team that triumphed over the two industrial giants in 1998 included a 28-year-old professor named Daniel Carder, who bears more than a passing resemblance to Tom Hanks.