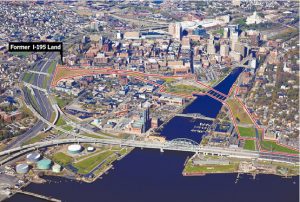 When the interstate highway system was built, not a lot of thought was given to how the new roads might impact on the cities they were connecting. The largest engineering project in U.S. history was impervious to just about anything that stood in its way, with eminent domain wielded like a jackhammer to clear all obstacles.

Decades later, when all the asphalt was in place, it became clear that numerous city neighborhoods would not share in the unbridled growth promised by the new highways. A surveyor’s line setting the route of a new road meant a slow economic death for more than few, now cut off from the city center and bisected by the interstates.

Such was the fate of a square-mile chunk of Providence, RI, severed from the city by 1-195 in a route preordained by the location of a bridge that predated the interstate.

This story could have ended there, with the stump of an amputated neighborhood slowly withering away. But when it came time to replace the old highway bridge, innovative city planners in Providence decided to rewrite the ending. They moved the bridge and the highway, reconnecting the severed salient to the city with 19 cleared acres of the highway’s old right-of-way, now called LINK land.

LINK land now forms the core of Providence’s new I-195 Redevelopment District, a bustling magnet for high-tech and higher-ed projects. Forward-thinking state investments in new underground power lines and realigned streets are being rewarded with a bevy of new developments, including a $40-million expansion of Johnson and Wales University on the west side of the Providence River. To be completed in 2016, the expansion will house the university’s new biology program and its School for Engineering and Design. Another parcel of LINK land is earmarked for a $20-million, mixed-use development with 4.500 square feet of retail, rental and office space.

With Providence boasting a much lower cost per buildable square foot than Boston or New York, city officials are predicting that all of the available lots in the new development will be scooped up within five years. The city’s new mayor, Jorge Elorza, has pledged to maximize this advantage with a tax stabilization deal for developers.

Gov. Gina Raimondo also is making good on her pledge to aggressively market the I-195 development as an innovation hub, creating a $25-million fund for gap financing for high-tech projects; other available incentives include the Rebuild Rhode Island Tax Credit.

Baltimore-based Wexford Science and Technology, which specializes in research parks adjacent to universities, reportedly is eyeing the I-195 land for a life sciences complex. CV Properties is converting an old power station in the Redevelopment District into a nursing education center for the University of Rhode Island and Rhode Island College.

And the new owners of the Pawtucket Red Sox minor league baseball franchise are said to be considering building a new stadium on the west side of the city, near the proposed Wexford life sciences complex.

Our friends in Providence are proving that the shortest distance to success isn’t always a straight line–in this case, a more circuitous route for a highway has become a surefire path for new growth.