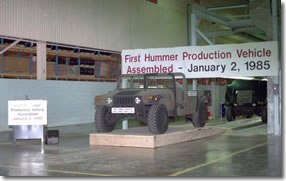 If you built a time machine, traveled back 30 years and told the denizens of Indiana the following would happen in 2015, they’d be very surprised to hear it–the Hummer plant in the Hoosier State will be producing Mercedes-Benz vehicles for the luxury SUV market in China.

Here’s what would startle our friends from 1985–

–In 1985, the average Chinese citizen couldn’t dream of owning a Mercedes.

–In 1985, a tidal wave of vehicles produced in Asia was flooding into the U.S. but only a trickle of U.S.-manufactured vehicles was going in the other direction.

–In 1985, the idea of converting a factory producing armored vehicles for the military into an advanced manufacturer turning out finely honed luxury cars for well-heeled civilians was preposterous.

–In 1985, the thought that a Mercedes luxury vehicle would be produced anywhere but Germany was inconceivable, as was the vision that Mercedes would introduce several models with an American Motors Corp. Gremlin-inspired hatchback instead of a trunk.

The recent announcement from Mishawaka, IN also is a pleasant surprise in 2015, In fact, it’s one of the most remarkable and improbable comeback stories of the U.S. Recovery.

In 1983, AM General, an independent heavy-duty vehicle producer not affiliated with Detroit’s Big Three (it was an offshoot of the original American Motors Corp.), was awarded a $1.2-billion contract from the Defense Department to produce the Pentagon’s new High Mobility Multi-Purpose Wheeled Vehicle (HMMWV, better known as Humvee), a jeep on steroids that could navigate the roughest terrain on the planet. Soon after it got the contract, AM General was acquired by defense contractor LTV Corp. and its assembly plant moved from Livonia, MI to South Bend, IN.

Between 1984 and 2007, more than 175,000 Humvees were produced for the U.S. military and its allies. In 1992, AM General unveiled a civilian version of the Humvee it called the Hummer (speaking of action heroes on steroids, the first Hummer to roll off the assembly line was purchased by Arnold Schwarzeneggar). In 1999, General Motors bought the Hummer brand and AM General began producing updated models designed by GM at a new plant in Mishawaka.

When the Great Recession and corresponding collapse of the U.S. auto industry forced GM into bankruptcy in 2009, the fiscal pothole was too large for even a Hummer to overcome. Ironically, it was the Humvee’s greatest benefactor—the U.S. government—that put a stake through the heart of the Hummer production facility in Mishawaka. Under the terms of its $49-billion bailout from the government, GM was forced under federal supervision to consolidate its facilities and shed its least profitable brands. A niche vehicle like the Hummer was deemed expendable and the Hummer plant was shuttered.

What a difference five years can make. Not only has U.S. auto manufacturing roared back to life, but thanks to renegotiated union contracts, consolidations and other cost-cutting measures, vehicle production in the U.S. is now cost-competitive with overseas production.

This paradigm shift has turbocharged U.S. automotive exports. in 2014, more than 2.1 million vehicles made in America were shipped abroad, more than double 2009’s total of 1 million.

There are several ironies imbedded in Mercedes’ decision to service China’s growing market for luxury cars with vehicles made in the U.S. If you told somebody just five years ago that China’s labor costs and individual wealth would rise so quickly that by 2015 it wouldn’t make sense for Mercedes to build cars in China to sell to well-off buyers in the PRC, they probably would have laughed at you.

Perhaps the most delicious irony of all involves the autoworkers who will be putting together Mercedes’ SUVs in Mishawaka [the plant will employ 350, down from a peak of 1,000 when the labor-intensive Hummer line was shut down].

Although union-friendly Germany has thus far honored local laws in Right-to-Work states and kept the UAW out of its plants in those states, German carmakers aren’t required to void existing UAW contracts in other states. So the assembly-line workers making Mercedes SUVs in Mishawaka will belong to the oldest UAW local in the United States.

Indiana passed its first Right-t0-Work law in 2012, but the law immediately was challenged in court by the UAW; it recently was upheld by Ohio’s Court of Appeals. However, the Mishawaka plant workers are being hired under an existing UAW contract with AM General that Mercedes agreed to grandfather into the deal.

Mercedes and Volkswagen both placed their major U.S. assembly plants in Right-to-Work states, in Tuscaloosa, AL and Chattanooga, TN, respectively. Right-to-Work laws prohibit companies from setting up ‘closed shops’ that require workers to join a union, undercutting the ability of any union to maintain membership in the plant or to conduct collective bargaining. Mercedes and Volkswagen have sent strong signals to AL and TN officials they are not opposed to unions and would like to set up German-style works councils at their North American plants.

Regardless of how the works-councils gambit shakes out, UAW members now are making Mercedes vehicles in Indiana, exclusively for shipment to China. We don’t know if they have different boxing rules in China, but in America the true measure of a champion is not whether you get knocked down–but whether you’ve got the fortitude to get back up.

Should building a permanent repository for nuclear waste be a top U.S. priority?