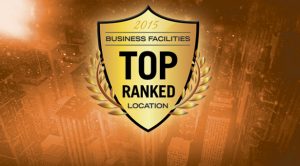 “Solar and wind-power installations continue to expand exponentially in the United States, so we expect the U.S. to give the PRC a run for its money in next year’s green energy investment ranking,” said BF Editor in Chief Jack Rogers.

Germany, Italy and India also made the top five in the renewable energy investment category, followed by the U.K., Spain, Japan, Brazil and France.

“Germany has turned away from nuclear power in the wake of the Fukushima disaster and it’s making good on a commitment to ramp up the amount of renewable energy it uses,” Rogers noted.

Switzerland retained its crown as the top-ranked nation in Global Competitiveness (Foreign Direct Investment) in BF’s 2015 rankings. Singapore again took second place in this category. The United States, which dominated the Global Competitiveness field for decades before losing its footing in the Great Recession, improved to third place from last year’s fifth-place result.

This year, BF ranked the European cities that are the Leading ICT Hubs. Munich tops the field, followed by London, Paris and Stockholm. New York City remains unsurpassed among Top Financial Centers in the 2015 Global Rankings Report, with second-place London edging out fast-rising Hong Kong. Singapore and Tokyo also made the top five in the financial hub results.

China repeated as BF’s top-ranked nation among Global Auto Production Leaders, with Japan and Germany (in second and third, respectively), moving ahead of the U.S., which placed fourth.

“With Volkswagen rolling past Toyota as the world’s top-selling brand, we expect Germany to continue to perform well in our global automotive ranking,” Rogers said.