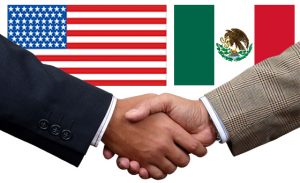 If you can stomach listening to the noise coming out of the presidential campaign, you might think the biggest crisis facing America is the need to secure the U.S.-Mexico border. According to one ubiquitous candidate (hint: he’s not very modest and has orange hair), we need to build a wall on the border pronto and make Mexico pay for it.

If you’ve heard some of this vitriolic chatter, it might surprise you to learn that officials on both sides of the Rio Grande are working as hard as they can to tear down any barriers to cooperation between the United States and Mexico. When it comes to economic development, these hard-working folks want the border to be invisible.

That’s right, cross-border economic alliances are expanding exponentially, generating growth that can be measured in billions of dollars.

Don’t believe us? Then check out the resolution that emerged from last week’s historic meeting in Harlingen, TX of the Bi-National Economic Development (BiNED) organization. The mayors of three Texas border towns (Harlingen, McAllen, and Edinburg) and officials from two TX counties (Cameron and Hidalgo) joined the mayors of their two sister cities in Mexico (Matamoros and Reynosa) to sign a proclamation incorporating both sides of the South Texas-Tamaulipas international border “into a seamless entity that will endorse, promote and secure the vitality of the region.”

According to its charter, BiNED, a Brownsville initiative, recently was formed to allow border communities to capitalize on their individual and joint strengths and to overcome any disadvantages resulting from competing with each other. Instead, they’ve pledged to join forces to compete with others across the hemisphere and around the globe.

“The resolution represents the significance of working as a region toward a common goal. It is this regional approach that will allow us to confront the challenges we have,” U.S. Rep. Filemon Vela of Brownsville said at the signing ceremony.

Harlingen TX already has a head start on this effort. The Harlingen Economic Development Corp. has taken several steps to hook up with the burgeoning aerospace sector in Queretaro, Mexico, including launching the Harlingen Aerotropolis at Valley International Airport (formerly known as the Harlingen Industrial Airpark), featuring shovel-ready parcels. Queretaro–home of jet producer Bombardier Mexico–is the hub of a Mexican aerospace industry that has grown since 2004 from 100 facilities supporting U.S. and European aerospace giants to more than 300 in 2015.

“It’s hard to believe, but [when I took office] New Hampshire was doing more business with Mexico than New Mexico was,” the governor told BF in an exclusive interview. “So during my first legislative session we passed the Border Jobs Initiative, which not only leveled the playing field with other states, but made us more competitive internationally.”

The centerpiece of Gov. Martinez’s border initiative was the development of the Borderplex in Santa Theresa, which during her tenure has grown into a primary logistics and manufacturing hub that straddles the New Mexico-Mexico border. A diesel fuel cost-saving measure helped land Union Pacific Railroad’s $500-million rail facility at the Borderplex.

“We also created the first of its kind international cargo zone, which allows trucks entering from Mexico to come into New Mexico with heavier cargo and unload on the U.S. side of the border. Before, these huge 18-wheelers had to partially unload before they crossed into the U.S. We’ve made it easier for business because we know that time is money,” Martinez said, noting that the creation of the special 12-mile-radius zone was a key factor in decisions by two large manufacturers—Interceramic, a maker of ceramic tiles, and picture-frame producer MCS—to locate warehousing facilities in New Mexico.

The results of Gov. Martinez’s initiatives to spur more cross-border business have been nothing short of spectacular: exports to Mexico from New Mexico notched an all-time high in 2014 of $1.549 billion, nearly doubling in one year’s time. But the governor made it clear to us that when it comes to building a trade superhighway between NM and Mexico, she’s just getting started.

Martinez recently met with Mexican President Enrique Peña Nieto to discuss the creation of what she calls the Gateway to America, a “bi-nation community.” This multi-billion-dollar initiative envisions a 70,000-acre cross-border zone linking Santa Theresa, NM with its sister city on the other side of the border in Mexico. Mexico will build a new rail line that ends in the bi-nation community zone, which lies at the halfway point along the 2,000-mile U.S.-Mexico border and is the easternmost land crossing between the two countries.

The scaremongers among the presidential wannabes may be telling you the U.S.-Mexico border is too porous, but when it comes to cross-border economic development, porous is good.