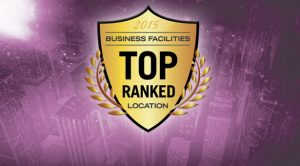 Austin, TX added to its impressive record of success in Business Facilities’ Metro Rankings Report with the best across-the-board showing in the magazine’s 2015 edition.

“This cosmopolitan high-tech hub in the Lone Star State continues to outpace the competition. It’s not a stretch to call Austin the most dynamic metro in the U.S., with unlimited potential,” said BF Editor in Chief Jack Rogers.

“With a cost of doing business 10 percent below the U.S. average, a thriving healthcare sector and a glowing quality of life, the Music City is ready to take on all comers,” Rogers said.

Raleigh is the top-ranked metro in a new rankings category, STEM Leaders, which ranks the locations with the highest percentage of college graduates in STEM-oriented fields.  Raleigh-Durham also tops the field in Life Sciences Clusters, closely followed by Boston and San Diego. The Raleigh area is BF’s No. 2 metro in Tech Jobs Leaders, third in Economic Growth Potential and eighth in Top Medical Device Hubs.

Durham, NC also comes in at No. 6 in BF’s new metro ranking for Advanced Manufacturing (Specialization), which is based on an analysis of the metros with the highest percentage of jobs specializing in 21st century manufacturing.

Rogers said BF plans to add more new categories like high-tech specialization in its future reports because these rankings give small- and mid-sized metros a chance to shine.

“Advanced manufacturing is critical to maintaining America’s status as an industrial powerhouse,” Rogers said. “Forward-thinking locations like Fond du Lac, which scored well in national surveys of high-tech manufacturing in smaller metros conducted by the Brookings and Milken institutes, deserve a place in our annual showcase.”