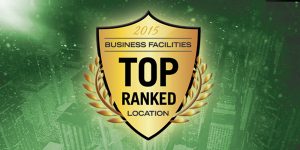 Maine, California and Colorado are the states with the most stringent Renewable Portfolio Standards (RPS) in a new state ranking that debuted this week in Business Facilities’ 2015 State Rankings Report.

Maine is the top-ranked state in BF’s new Renewable Portfolio Standards Leaders (2020) ranking, requiring that 40 percent of the electricity its utilities sell be generated by renewables by the end of this decade. Second-place California, with an RPS requirement of 33 percent, was followed by Colorado, which set the benchmark at 30 percent.

“Of the 29 states which have thus far enacted RPS requirements, these three states have by far set the most aggressive goals for conversion from a carbon-based power system,” said BF Editor in Chief Jack Rogers. “We commend them for their leadership and call upon the states that have yet to establish an RPS to make it a top priority.”

BF’s 2015 State Rankings Report includes a bevy of categories showcasing the leaders in key renewable energy sectors. California repeats as BF’s top-ranked state for Installed Solar Power Capacity, with nearly half the installed capacity in the nation and more than triple the capacity of second-place finisher Arizona.

Texas continues to rule the roost in Installed Wind Power Capacity, with nearly twice the capacity of the No. 2 state in this category, California. Iowa also repeated as BF’s top-ranked state in Wind Power/Percentage of Overall Energy, with 28.5 percent of its electricity generated by wind power. Texas, which recently completed the installation of a $6.8-billion wind power grid in the western part of the Lone Star State, moved into 10th place in this category.

Iowa, a perennial front-runner in ethanol production with more than three times the production capacity of any other state, again took the crown in BF’s 2015 ranking for Biofuels Leaders (Ethanol).

Rogers noted the exponential growth in wind and solar power installations across the U.S. during the past two years as the cost of electricity derived from renewables has become much more competitive with traditional carbon-based energy sources.

“The market for renewable energy will continue to heat up along with the weather,” Rogers said. “There’s no denying that climate change is upon us. The locations that are prepared to transition from a carbon-based economy and to meet the other challenges that confront all of us, including dwindling water resources, are the places that will succeed in the 21st century.”

Click here to view the complete state results from the 2015 BF Rankings Report.