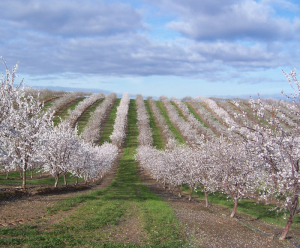 If we ever think about statistics when we’re wolfing down a plate of our favorite foods, the only relevant data that occasionally (and only occasionally, for most of us) comes to mind is the amount of calories we’re consuming.

But as one effect of climate change looms large–the epic drought in the western half of the U.S., and the impending water resources crisis it is creating–people increasingly are starting to focus on a new data-set for agricultural products: how much water it takes to produce some of our favorite foods.

Nowhere is this focus more intense right now than in California, which is in the grips of its worst drought in recorded history. California is the most productive agricultural state in the nation, the leading producer of almonds, avocados, broccoli, carrots, cauliflower, grapes (and the world-class wine that is made from them), lettuce, onions, peppers, spinach, tomatoes, walnuts and dozens of other commodities. At least 80 percent of California’s water is consumed by agriculture.

But even a cursory look at the worst water-guzzlers among this bounty of crops is guaranteed to raise your eyebrows. Here’s just a few startling examples:

–A staggering 10 percent of California’s water is consumed by one crop: almonds. California’s almond-growers use an estimated 1.1 trillion gallons per year to produce these tasty nuts.

–It takes five gallons of water to grow a single walnut.

–It takes 74 gallons of water to produce a pound of avocados. During the past 10 years, California growers have quadrupled the number of avocados they produce to meet surging demand for the green goodness found inside this gnarly fruit. The average American now consumes four pounds of avocados each year, which means we’re each “drinking” about 200 gallons of Golden State water just to make our Super Bowl guacamole dip.

–The average American consumes more than 300 gallons of California water per week by eating the food that was produced there.

That small sampling gives you an idea of just how big the challenge of adjusting to a much drier climate is going to be for the nation’s most populous state.

A few states already are ahead of the curve when it comes to aligning their agriculture industry to the reality of a drier climate. In the current issue of BF, New Mexico Gov. Susana Martinez told us that NM doesn’t have to resort to the mandatory conservation measures now being imposed in California. New Mexico has been encouraging farmers to grow drought-resistant crops for years; the state also installed irrigation systems that use water more efficiently.

According to a recent report in The New York Times, winemaking in Washington state has doubled in the past decade–a trend that is accelerating because they’re growing drought-resistant grapes in the Pacific Northwest. Numerous apple orchards in Washington and neighboring Oregon are being converted to grape vineyards, which use less water.

The bottom line here for everyone: the next time you eat something, think about how much water that morsel likes to drink.