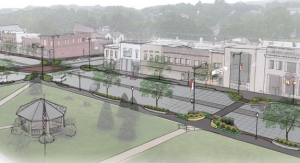 Demonstrating an environmentally conscious approach to community redevelopment, a completed “green” streetscape design in the city of West Union, IA has been recognized with an award from the American Society of Landscape Architects Iowa Chapter. Each year, the professional association honors the best in landscape architecture from across the state. The West Union Green Streets Pilot Project by Conservation Design Forum was one of six projects in Iowa to be recognized in the competition.

Green innovations like porous paving for streets and sidewalks, combined with 36,000 square feet of rain gardens aim to capture and retain 95% of stormwater that falls within the downtown district, relieving the burden on the municipal storm sewer system and detaining urban pollutants from reaching streams and other waterways.

In addition to the streetscape project which was completed in 2013, the City just completed the renovation of 10 historic building facades within the downtown area and added 12 new second floor affordable housing units in three historic buildings.

The West Union “Green Streets” Pilot Project, which began in 2008 was funded through a partnership of local, state and federal agencies. It now serves as a sustainability focused redevelopment model for towns and cities across the Midwest looking to resolve issues of aging infrastructure while at the same time revitalize their downtown business districts.

In 2015, the Iowa Economic Development Authority compiled information on the impact that the “Green Streets” downtown redevelopment project has had on the community of just 2,500 residents. The project summary reports that since the start of the project: