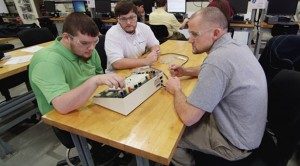 Earlier this year, BF published a cover story entitled Workforce Training is Job One, highlighting the locations who are ahead of the curve in addressing this most critical of economic development priorities.

People who still are looking for work in the uneven recovery that followed the worst recession in 80 years may find it hard to believe, but there’s a severe shortage of skilled workers in the United States. According to a study by the Boston Consulting Group, at the current rate, the number of unfilled skilled manufacturing jobs in the U.S. will reach approximately 875,000 by 2020. If the U.S. is to defend its position as the world’s leading industrial power, we need to quickly generate an army of STEM-oriented students and give them the tech training they need to fill 21st-century advanced manufacturing jobs.

A few years ago, the conventional wisdom dictated that state workforce development incentives which partially offset training costs for new businesses would do the trick. When that was not enough, forward-thinking locations began to offer on-site training facilities to major industry players. However, now almost everyone realizes that simply offsetting costs or even bringing training to the doorstep of new facilities is not going to solve the problem.

Today, the best practices are being established by trailblazers like Tennessee and New Mexico. These states and a few others are reaching down into high school and steering kids into specialized tech programs that offer dual credit, which can be applied to a continuation of advanced manufacturing-oriented studies at a Tech School or Community College. The two states have hooked up their higher education resources with advanced manufacturing businesses to develop college curricula that will produce the technicians needed for new high-tech growth sectors.

Tennessee has boldly taken this effort to the next level, offering two free years of Tech School or Community College to all eligible students in the state. President Obama embraced TN’s program and made it the centerpiece of this year’s State of the Union address, calling on Congress to make the TN model the law of the land.

Until now, it appeared that the majority in Congress would treat Obama’s tech school proposal the same way it responds to just about everything else the president asks for–by ignoring it. But this week comes news that Congress actually may be preparing to join the effort to develop 21st century workforce training in the U.S. U.S. Senators Chris Coons of Delaware and Kelly Ayotte of New Hampshire have introduced the Manufacturing Skills Act, which would create a $100-million competitive grant program to support state and metro initiatives that augment the manufacturing workforce and address regional skills challenges.

Applicants for Skills Act grants will establish a local task force, consisting of leaders from the public, nonprofit, and manufacturing sector, as well as labor and education representatives, to apply for and carry out the three-year grant. A federal inter-agency partnership will review applications and award grants to the five states and five metropolitan areas with the strongest proposals.

We’re pleased to see a bipartisan initiative on workforce training emerge from Congress. But we’re not sure that a “Race to the Top”-style competitive grant program is the most effective way to deploy $100 million in federal funding for workforce development. The top-priority demand in the economic development marketplace for an available skilled workforce already is moving state governments to establish aggressive and innovative manufacturing skills programs on their own, without federal assistance. This trend will accelerate as locations with forward-thinking workforce training initiatives increasingly win the competition for big-ticket projects.

The biggest and fastest impact Congress can make to alleviate the skilled worker shortage in the U.S. would come from a national program offering two free years of Tech School to every high school graduate in the country. A $100-million bet on the next generation of American workers guarantees a healthy return on the investment, many times over.

Did Bill O'Reilly deserve to get fired?