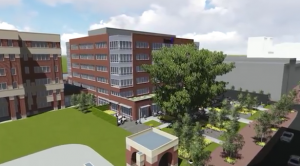 “We’re happy to see Kindred continue to expand its footprint here in the Commonwealth with the creation of 500 full-time jobs. Kentucky is becoming the critical hub for the healthcare industry, and Kindred’s continuing success is a big reason why,” said KY Gov. Steve Beshear.

“It is exciting and gratifying to see a home-grown company continue to expand and become the national leader in its healthcare sector,” said Mayor Greg Fischer. “Kindred’s expansion and development of Kindred Square is a major investment in our downtown, creating a new headquarters building for our skyline and a major anchor for South 4th Street. Their growth plans, including the creation of so many new jobs, underscores this company’s confidence in Louisville and solidifies our best-in-the-world status as the leader in lifelong wellness and aging care.”

Healthcare is a major industry in Kentucky, employing nearly 430,000 people in the state last year. Louisville is home to the nation’s largest collection of headquarters in nursing home, rehabilitation, assisted living and home health administration.

The new facility also will bring Kindred employees from across the U.S. to Louisville for seminars, educational programs and company meetings.

“We thank Gov. Beshear, Mayor Fischer and representatives from the Commonwealth of Kentucky and the city of Louisville for their support of this expansion project,” said Paul J. Diaz, Kindred’s CEO. “We are proud to call Louisville home and in our ability to contribute positively to the region’s leadership in health and aging care services.”

“The expansion of Kindred’s Support Center allows us to increase the training and educational opportunities in Louisville for many of our employees,” said Benjamin A. Breier, Kindred’s president and chief operating officer. “The new space will enhance our ability to invest in the clinical expertise of our employees with the addition of Kindred University and in their wellness with the creation of an onsite health clinic.”

“I am pleased that Kindred is expanding its corporate headquarters in downtown Louisville,” said Sen. Gerald Neal, of Louisville. “This investment will create new jobs, boost our economy and bring people to our city. Kindred is a good corporate partner, and I wish the company continued success.”

The Kentucky Economic Development Finance Authority preliminarily approved Kindred for tax incentives up to $11 million through the Kentucky Business Investment (KBI) program. The performance-based incentive allows a company to keep a portion of its investment over the term of the agreement through corporate income tax credits and wage assessments by meeting job and investment targets.

KEDFA also approved the company for tax benefits up to $500,000 through the Kentucky Enterprise Initiative Act, which allows approved companies to recoup Kentucky sales and use tax on construction costs, building fixtures, equipment used in research and development and electronic processing equipment.