Planning at the state and national level leads to more efficient investments in infrastructure, better resilience in the face of climate change and greater equity in economic development, but most land use planning continues to be done at the local level, according to new research published by the Lincoln Institute of Land Policy.

Planning for States and Nation-States in the U.S. and Europe, edited by Armando Carbonell, Gerrit-Jan Knaap and Zorica Nedovic-Budic, examines the role of the U.S. federal government and the European Union, and compares land use and spatial planning structures in five U.S. states (Oregon, California, Delaware, Maryland and New Jersey) and five western European nations (The Netherlands, Denmark, France, U.K. and Ireland). 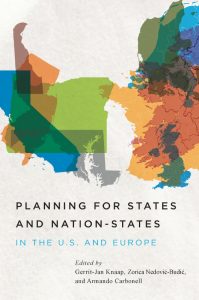 “In the U.S., where few states engage in planning and an aversion to national planning persists, the love affair with ‘localism’ handicaps our ability to deal with challenges like climate change, growing economic disparity, and inadequate infrastructure,” said Armando Carbonell, senior fellow and chairman of the Department of Planning and Urban Form at the Lincoln Institute.

The book, which is based on a symposium by the Lincoln Institute of Land Policy, the School of Geography, Planning and Environmental Policy at University College, Dublin and the National Center for Smart Growth Research and Education at the University of Maryland, debuted at the American Planning Association’s National Planning Conference earlier this year.

The fundamental challenges of building and sustaining human settlements have not changed significantly for centuries: shelter, sanitation, transportation, nutrition, social interaction and economic production. The relative urgency of these challenges, however, has changed over time, as have the planning and public policy approaches to address them. Since the turn of the last century, climate change, economic development, social justice and community revitalization have risen to the top of the planning agenda.

To address these issues, planners have conducted extensive research, developed and marshaled new technologies and adopted a variety of new tools and policy instruments. In addition, planners and policy makers in some European nations and some U.S. states have significantly changed the relative roles of international organizations and national, state, regional and local governments.

In the United States, during the first term of the Obama administration, the federal government launched several new initiatives to facilitate collaborative planning at the metropolitan scale. Beginning in the 1970s, some states strengthened and then loosened oversight of local planning, some assigned new responsibilities to regional governments, and still others prepared and adopted statewide development plans. Oregon and Maryland are perhaps best known for robust statewide planning initiatives to encourage more sustainable development.

In Europe, changes in the roles of governments have been more dramatic and widespread, beginning with the creation of the European Union (EU) and the emergence of pan- European planning frameworks.  To foster unity and economic growth, the EU promulgated principles of spatial development for its member nations. Some European nations adopted national spatial development strategies, while others delegated more responsibilities to regional and local governments.