By Shana Daley
From the March/April 2015 issue

Gov. Andrew Cuomo recently announced that 11 more businesses plan to expand in or locate to New York State under the START-UP NY program. They will join the more than 70 companies already participating in the initiative, which creates tax-free areas associated with colleges and universities across the state in order to spur economic growth.

The 11 businesses will invest nearly $30 million, and have committed to create at least 158 new jobs over the next five years in tax-free areas sponsored by the University at Buffalo, Rochester Institute of Technology, Farmingdale State College, Morrisville State College, SUNY Brockport and Stony Brook University. This latest group of companies joining the program brings the total number of businesses participating in START-UP NY to 83, representing commitments to create more than 2,530 new jobs and invest more than $133 million in communities throughout the state.

ISLIP: A LEADER ON LONG ISLAND

The Town of Islip has long been known as a leader of economic development in New York. Islip boasts the largest industrial corridor in the Long Island region, major infrastructure advantages over surrounding areas and an Industrial Development Agency (IDA) that has won renown for its continuous ability to attract new businesses.

One of the prime reasons for Islip’s attractiveness to local, national, and international businesses is the proximity these businesses have to Long Island—MacArthur Airport (LIMA), which the Federal Aviation Administration has defined as being on-par with LaGuardia Airport and John F. Kennedy Airport. Having a nationally-recognized airport within Islip Town helps our local companies conduct their business more effectively and efficiently. Just as MacArthur Airport helps local businesses expand, the airport itself is working to grow its presence to handle the economic demands of the future.

Just next door to Long Island MacArthur Airport is Islip’s Foreign Trade Zone (FTZ). Foreign Trade Zone #52 was created to help businesses with an international scope grow and thrive. These companies can utilize the FTZ’s singular economic status to avoid costs associated with importing and exporting goods with other countries. The FTZ sits at the intersection of a crucial transportation hub that features railways, highways, and our commercial airport and is no stranger to new development. In 2013, AA Technology Inc., a growing manufacturer and distributor of circuit boards and electrical components, decided to expand in the FTZ and construct its own 36,000 square foot facility. Because of their strategic location and investment, AA Technology Inc. will enjoy incentives offered by both the FTZ and the Islip Industrial Development Agency.

The Town of Islip has a proud tradition of business success across a variety of industries; its technology, food distribution and pharmaceuticals sectors are thriving. Technology companies from aerospace to telecommunications have found a home in Islip. All-System Aerospace, a warehouse distributor of helicopter and aircraft parts, has expanded within Islip and leased a larger building that allows them to keep up with market demand. They have remained in Islip largely because our IDA was able to help them adapt and expand to ensure that business was uninterrupted. CPI Aero, a company that manufactures aircraft components, primarily for the U.S. military, was able to expand their operations to a new facility, and also did so with the help of the Islip IDA. Similar to CPI Aero, Sartorius Stedim North America also expanded their operations into a new facility, occupying an additional 40,000 square feet. Sartorius is a leading provider of cutting-edge equipment and services for the biopharmaceutical industry and is investing over $2 million in the build-out and purchase of equipment for a new R&D lab. And most recently, B/E Aerospace, a leading manufacturer of high performance lighting systems for jet aircraft, expanded into a 60,000 square foot facility in Bohemia. In addition to a $1-million investment in equipment, B/E Aerospace also pledges to create 30 jobs within two years.

Islip welcomed Ascent Pharmaceuticals in 2012. With the assistance of the Islip IDA, the company, owned by InvaGen Pharmaceuticals, purchased and renovated an existing 250,000 square foot facility for $20 million and they expect to invest another $19 million in additional equipment and research. In 2015, Ascent Pharmaceuticals will soon break ground on two more facilities, across the street from their first project, totaling 340,000 square feet of manufacturing and bottling space and will add 120 new jobs.

The world’s largest food distributor, Sysco Inc., constructed a 420,000-square- foot facility in Central Islip, creating over 250 jobs with more to come. SYSCO has placed a special focus on hiring from within the community. The distribution center boasts many unique features, including a hydrogen fuel station to power all of the forklifts in the facility.

For information on how your business can grow in Islip, please visit www.islipida.com. 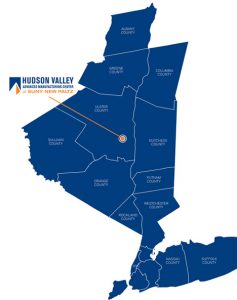 This award was a game-changing moment for SUNY New Paltz, if not the entire Hudson Valley and follows the opening of the nation’s first MakerBot Innovation Center on the campus.

HVEDC’s New York BioHud Valley initiative shows the world why the Hudson Valley is a national leader for life science and medical device advancements. The region boasts of more than 9,600 biomedical professionals contributing to this sector’s vitality and success.

The region’s first biotech incubator, BioInc@NYMC—located on the campus of New York Medical College in Valhalla—is specifically designed to transform medical research in the Hudson Valley by working closely with the brightest innovators and sharpest minds in their joint quest for achieving better health outcomes for the public at large.

Regeneron Pharmaceuticals’ Tarrytown campus underwent a massive expansion in 2014 and is aiming to occupy two new buildings by the end of this summer. The company has 1,800 employees working in Westchester County and 1,100 located at its manufacturing facility in Rensselaer, NY.

PAR Pharmaceutical is in the midst of relocating its corporate headquarters from Bergen County, NJ, into Rockland County. PAR will invest $50 million into the Chestnut Ridge campus to build research and corporate development space. Ardsley, NY-based Acorda Therapeutics announced in 2014 the company’s plans to expand its headquarters at the Ardsley Park Life Sciences campus.

The Hudson Valley Food and Beverage Alliance represents the crossroads where innovation and collaboration meet to form vibrant and trendsetting economic outcomes for the benefit of the entire region. The farm-to-table and craft brewing movements are two prime examples of how HVEDC is on the cusp of growing trends. Amy’s Kitchen, the international large-scale natural and organic food company, plans to build a 580,000-square-foot food plant in Goshen.