General Motors has announced that GM will invest $439 million for facility upgrades, including a new paint shop. The 450,000-square-foot facility will be almost half the size of the company’s entire operation in Warren County. 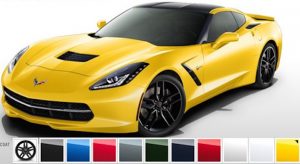 “For more than three decades, Kentucky and General Motors have shared a deep connection,” said KY Gov. Steve Beshear. “This expansion only makes the relationship stronger and will create a foundation for future growth. I want to thank GM for its continued investment in the Commonwealth, and I look forward to Kentucky being home to the Corvette for generations to come.”

“Such a significant expansion of the Bowling Green Assembly Plant will help the company remain competitive in the region and around the world,” said KY Lieutenant Governor Crit Luallen.

The paint shop will receive substantial upgrades in technology, including new tooling, robots and state-of-the-art environmental and efficiency enhancements. Construction is planned to begin this summer and is expected to take approximately two years to complete. Vehicle production schedules will be unaffected by the construction.

“With this major technology investment, we can continue to exceed the expectations of sports car buyers for years to come,” said North American Manufacturing Manager Arvin Jones. “These types of investments are evidence that the customer is at the center of every decision we make.”

This latest investment builds on approximately $135 million invested in the plant over the last four years for the new seventh-generation Corvette and Performance Build Center. Last month, GM announced it would invest $5.4 billion in its U.S. facilities over the next three years.

GM began production of the Corvette at the Bowling Green plant in 1981, and the facility has remained the exclusive home of the Corvette for over 30 years. Known around the world as America’s sports car, the Corvette is the world’s longest-running, continuously produced passenger car with more than 1.6 million assembled.

Since the launch of the all-new 2014 Stingray, the car has experienced one success after another. Corvette sales reached 38,000 last year, and the plant hit a record year for public tours in 2014, welcoming almost 56,000 visitors from around the world.

“The GM Corvette Plant is one of the unique gems and sources of pride of Bowling Green,” said Sen. Mike Wilson of Bowling Green. “We celebrate the expansion of the plant and look forward to the increased production and job growth within the community.”

“The Corvette has become one of the most recognizable symbols of America,” said Rep. Jim DeCesare of Bowling Green. “Bowling Green continues to play a huge role in making the Corvette an outstanding sports car. Our relationship with the Corvette Assembly Plant, the only plant in the world to manufacture the Corvette, is special, and I’m pleased with the confidence GM is showing by making this large investment in Warren County to guarantee more cars will roll off the assembly line for years to come.”

“Since opening their doors in Bowling Green over 30 years ago, GM has been an excellent corporate citizen to our community,” said Bowling Green Mayor Bruce Wilkerson. “We are delighted GM has chosen to expand here and are thankful for their support of Bowling Green.”

General Motors also is a founding member of the Kentucky Automotive Industry Association (KAIA). KAIA is an industry-led organization that is driven by the needs of Kentucky’s expansive automotive industry. The association was formed hand-in-hand with Kentucky’s OEMs and suppliers to address the challenges and opportunities of the industry.