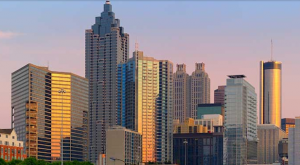 The City of Atlanta has become the first major city in the Southeast to pass legislation requiring the tracking and reporting of building energy use data. Under the Atlanta Commercial Buildings Energy Efficiency Ordinance, the city aims to meet these goals by collecting (or “benchmarking”), reporting and sharing energy use data for the City’s commercial buildings, along with periodic energy audits and potential improvements to existing building equipment and functions (called “retrocomissioning”). This process is anticipated to reduce commercial building energy use and spur local economic development while helping the city meet its larger sustainability goals.

Using these tools, the City projects that the ordinance will drive a 20 percent reduction in commercial energy consumption by the year 2030, spur the creation of more than a thousand jobs annually in the first few years, and cut carbon emissions in half from 2013 levels by 2030.

The City Energy Project, a joint initiative of the Institute for Market Transformation (IMT) and the Natural Resources Defense Council (NRDC), is pleased to support Atlanta in creating and passing this important legislation. Atlanta is the 12th U.S. city to enact benchmarking legislation.

“Atlanta is paving the way for other cities to take advantage of the significant environmental and economic benefits that come with making city skylines more energy efficient,” said Melissa Wright, Director of the City Energy Project at NRDC. “This ordinance is tailor-made for Atlanta, taking best practices from other cities and refining them to meet local needs. It will not only reduce harmful air pollution that threatens public health, but drive local job-creation, and help the city and local buildings lower their energy bills.”

Buildings currently account for 66 percent of Atlanta’s total energy use. This new ordinance addresses energy use in private and city-owned buildings over 25,000 square feet in size. This includes 2,350 buildings that, as a whole, represent 88 percent of the city’s commercial sector.

“After its citizens, a city’s buildings are its most important assets, and in many cases, it’s shocking how much information about these structures remains unknown. Atlanta’s new ordinance combines four powerful tools that together can provide unparalleled insight into these valuable assets,” said Cliff Majersik, Executive Director of the IMT, a Washington, DC-based nonprofit organization that is a proponent of building energy benchmarking across the country. “Benchmarking data establishes a baseline as to how a building is currently performing. In conjunction with this information, energy audits and tuning give building owners actionable information on the financial impacts of potential improvements and empower these owners to focus on the most cost-effective options for their building and their business. Providing building performance to the public informs leasing and purchasing decisions; it enables the market to function properly and reward efficient buildings with higher occupancy and faster lease-up.”

Building off of this data, owners will then be asked to complete an energy audit once every 10 years. An energy audit is a detailed assessment of how a building could improve its performance through upgrading its equipment and systems. Building performance data collected under the benchmarking initiative will be made transparent to the public to allow the market to recognize, reward, and drive increased demand for high-performing buildings.

Other participating City Energy Project cities include Boston, Chicago, Denver, Houston, Kansas City, MO, Los Angeles, Orlando, Philadelphia, and Salt Lake City. By investing in building energy efficiency programs and policies, together the City Energy Project participants are projected to cut pollution equivalent to taking 1.4 million cars off the road and save residents and businesses a combined total of nearly $1 billion annually on their energy bills.

Buildings remain the largest user of energy in America, with a significant portion of this energy being wasted due to inefficient operations. However, benchmarking and transparency policies, along with tools such as energy audits, have been shown to help identify opportunities to cut waste and drive investments in energy efficiency improvements as a means to reduce utility bills, create jobs, drive local investment, and reduce harmful pollution continues to grow across the country.