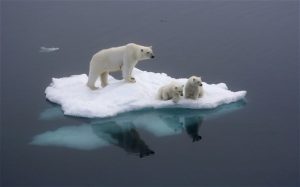 In recent months, it seemed like a consensus finally had been reached in the political class on the reality of climate change and the need to take tangible action to mitigate its potential impact. The momentum of the transition from a carbon-based economy to a green-powered future seemed to be speeding up.

The most promising signs of this trend occurred during the winter just ended, which was particularly brutal in the Northeast (while the rest of the world kept heating up, especially Alaska). Sen. James Inhofe of Oklahoma, a climate-change denier who recently became chairman of the Senate Environmental Committee, brought a grapefruit-sized snowball into the U.S. Senate chamber and tossed it to his colleagues like a gauntlet. The Senate responded by overwhelmingly passing a resolution declaring (symbolically at least) that climate change does, in fact, exist.

On the more significant side of the ledger, President Obama reached an historic agreement with China which for the first time commits the PRC (the world’s largest emitter of carbon fumes) to a long-term reduction in fossil-fuel emissions and the gradual conversion of its coal-powered grid to cleaner sources of electricity.

Well, this month comes a reminder that the agenda of the old guard still has some legs.

This one-two punch also originated in Washington, from the same people who produced the positive news cited above: President Obama gave the green light to Shell to begin drilling for oil in the Arctic; the Senate took the first of a series of votes that will end up eliminating the wind energy production tax credit (PTC), which has spurred exponential growth of U.S. wind power for the past five years.

The federal PTC, first enacted in 1992, gives a rebate of 2.3 cents per kilowatt-hour for wind energy projects. The program was dramatically expanded as part of the federal stimulus package in 2010, generously applying the rebate to the first 10 years of a power company’s new wind-turbine operations. The success of the rebate is hard to deny: 17 states now get more than five percent of their electricity from wind; more than 14,000 megawatts of new wind power was installed in the U.S. last year alone; and, according to industry experts, the continued expansion of wind power has the potential to supply up to 20 percent of overall U.S. power needs by 2030 (some say 35 percent by 2050 also is feasible, if offshore wind power is fully developed).

So keeping the PTC in place for the wind power industry is good for America, right? Not according to one side of the political aisle in Washington, the side that took control of both wings of Congress in the last election. The folks on that side of the aisle have been gunning for the PTC for several years, branding it a stimulus giveaway that rewards politically connected tree-huggers.

Supporters of the PTC were able to keep it alive in one-year increments in omnibus budget deals in 2013 and 2014, but the new majority has made it clear they now have the votes to kill it outright. In January, the Senate voted 51-47 to defeat an amendment by Sen. Heidi Heitkamp of North Dakota to authorize a five-year extension of the wind power PTC. [Kudos to Sen. Heitkamp, who represents a state in the midst of an oil boom, for understanding that the wind in the High Plains is perhaps a greater long-term asset than the bounty of shale oil under the ground].

We’ll say this about the opponents of the PTC: at least they’ve been consistent. Not so, President Obama. At the beginning of his second term in office, the president firmly tied his legacy to transformative action moving climate change to the top of the nation’s agenda and speeding America’s transition to green energy.

We were hoping this stance ultimately would prompt the president to lead a global effort to ban drilling in the Arctic, which–in one of the great ironies of human history–now has become the oil industry’s prime target because the melting of the polar ice caps (from the greenhouse gases we’ve created burning fossil fuels!) has made it much more accessible to large-scale rigs and oil tankers.

Royal Dutch Shell acquired a $2-billion lease to drill off the coast of Alaska in 2008, but the oil giant’s clumsy (read dangerous) trial runs and the specter of the huge BP oil spill off the Gulf Coast put further activity on hold in the most environmentally sensitive region on Earth. Many assumed that President Obama’s strong tilt in favor of stringent environmental regulations, as well as his position on climate change, would keep the red light lit. So it was particularly jarring to see him flash the “go” signal a few days ago.

Yes, Obama’s conditional grant of approval to Shell to drill up to six exploratory wells in the Chukchi Sea about 70 miles off the North Slope of Alaska is loaded with safety-oriented restrictions: the wells will be shallow (about 140 feet deep), far less intrusive than BP’s mile-deep Deep Water Horizon operation that blew up in the Gulf of Mexico; Shell must install a fully tested well-capping system that could quickly contain a blowout; and, during winter months, Shell must maintain two rigs at the drilling site at all times in order to drill a relief well in the event of a blowout.

Frankly, we’re not impressed. Obama’s limited green light to Shell no doubt will open the door to a frantic global race to exploit the riches beneath the surface of the Arctic (estimates of the reserves in Alaskan waters alone top 30 billion barrels of oil); competitors like Canada and especially Russia will likely ignore environmental and safety considerations as they rush to scoop up the crude from the top of the world.

We strongly suspect that geopolitical considerations trumped scientific concerns in the president’s calculations on this issue. The re-emergence of the United States as the world’s largest producer of oil has placed a potent weapon in the president’s arsenal which gives him (and future presidents) significant leverage in the endless struggle for global hegemony.

Let’s face it, flooding the global oil market with a tidal wave of new crude pulled out of North Dakota and, eventually, the Arctic, effectively gives the U.S. control over the price of oil–control which heretofore has resided on the turf of a rogues’ gallery of international bandits, including Saudi Arabia, Iran and Russia. Keeping the price below $60 a barrel will help fuel the growth of U.S. GDP with cheap energy while suppressing the economies of the bad guys who put all their eggs in the fossil-fuel barrel.

A rather short-sighted victory, Mr. President, which you’ll have trouble justifying to your grandchildren when you’ve got to relocate your retirement villa on the beach in Hawaii to higher ground. Legacy, shmegacy.