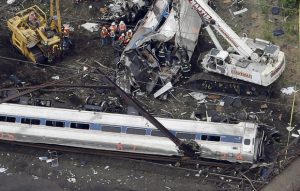 The derailment of an Amtrak commuter train on the heavily traveled Washington-to-New York route last week has focused new attention on the woeful condition of U.S. infrastructure.

The exact cause of the crash on the tracks in Philadelphia, which resulted in eight fatalities, has yet to be determined. Preliminary investigations indicate the train was traveling more than 100 m.p.h. when it approached a sharp curve in the rails, twice the speed limit on that stretch. There also have been reports of a projectile hitting the windshield, which may have distracted the engineer at the moment he was supposed to throttle down.

We’ve expended a lot of pixels in this space drawing attention to the decrepit state of U.S. infrastructure, which last year was given an overall grade of D+ by the American Society of Civil Engineers. ASCE says the U.S. needs to spend at least $2 trillion on infrastructure upgrades by the end of this decade in order for America to remain competitive as a leading industrial power. That’s trillion with a T, and we’ve only got five years to do it.

Our primary focus has been on the overwhelming number of roads, bridges and dams that are on the verge of collapse across the country. Today comes a report from The New York Times which confirms the U.S. also has ignored, neglected or postponed dealing with the infrastructure priorities of the nation’s rail system. The Times compared the spending on rail infrastructure in Europe and East Asia–where new high-speed rail lines are thriving–to the paltry amounts allocated annually in the U.S.

Here are some highlights (or, from our perspective, lowlights) from the Times’ report:

— U.S. rail service has one of the worst safety records in the developed world, despite having some of the least-extensive rail networks among developed nations. U.S. rail fatality rates are almost twice as high as in the EU and South Korea, and triple the rate in Australia.

— Seven years after Congress instructed U.S. railroads to install automatic speed control systems by the end of 2015–systems which most likely could have prevented the accident in Philadelphia– almost every railroad in the nation has not done so and is nowhere close to meeting the deadline by the end of this year. In France, Germany, Italy, the Netherlands and Spain, 100 percent of passenger rail service lines have fully operational speed controls.

— According to the International Transport Forum of the Organization for Economic Cooperation and Development, the U.S. invested less than 0.1 percent of its GDP in rail systems in 2013, a quarter of what was spent by the U.K. and one-sixth of the allocations of France and Australia. During the past decade, India, Russia and Turkey, among others, have spent greater shares of GDP on rail than America.

— The per capita comparison is even worse: the U.S. spends about $35 per person on rail infrastructure, compared to $100 per person in Japan.

If you think the horrific rail catastrophe in Philadelphia will spur Congress to take action, think again. While the wreckage in Philly was still being lifted off the tracks, the House Appropriations Committee blithely took an ax to President Obama’s $2.45 billion funding request for Amtrak for the coming fiscal year, reducing it to $1.1 billion–$251 million below the current funding level. When reporters asked House Speaker John Boehner about this lack of urgency regarding railway funding, he dismissed the question as “stupid.” In the train wreck known as Congress, you’ll find Boehner in the bar car, sipping a glass of his customary Merlot.

When it comes to U.S. infrastructure, the gates have come down, the red lights are flashing and the warning bells are ringing loudly. Congress has America stuck on the broken tracks, sitting there and ignoring a disaster that’s heading straight for us.