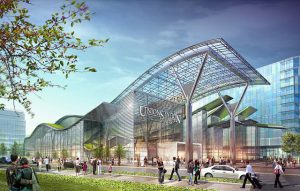 “Make no little plans; they have no magic to stir men’s blood and probably themselves will not be realized. Make big plans, aim high in hope and work, remembering that a noble, logical diagram once recorded will not die, but long after we are gone be a living thing, asserting itself with ever-growing insistence.”

Chicago architect Daniel Burnham is said to have uttered these sentiments in 1908, when he unveiled his Beaux-Arts masterpiece, Washington D.C.’s Union Station.

Anyone who has traveled through this elegant dapple-domed portal in the nation’s capital no doubt has felt a surge of nostalgia in a public space that evokes the grandeur of a gilded age when time wasn’t measured by digital devices but gold watches pinned to vest pockets.

Unfortunately, for more than a century, the ride into Union Station from the north has been pretty disgusting. The 20 tracks that feed into the station are a naked eyesore of decay and neglect, dividing entire neighborhoods like a scar that never healed.

Well, now it appears that city planners in Washington have taken Burnham’s words to heart. This week, they unveiled some truly “big plans” that probably exceed the architect’s wildest dreams. A $6.8-billion, three-million-square-foot, multi-use development soon will begin rising over tracks at Union Station. Fittingly, this mega-project will be called Burnham Place.

According to a report in today’s New York Times, the 14-acre project envisions 1.5 million square feet of office space, 1,300 residential units. 100,000 square feet of retail space, more than 500 hotel rooms, and parks and plazas. A new platform over the tracks will extend a renovated and reconfigured station that will be connected to the mixed-use development. There also will be expansion under the tracks: a lower level will be built, adding more tracks to the station. An existing 2,200-space parking garage will be demolished and replaced with a larger parking facility underground. The space under the tracks also will be “harvested” to create a new bus terminal.

The entire project will take nearly 20 years to complete, with the first above-ground buildings expected to top off in 2023.

The planners will work with Aldridge, a local developer who acquired the air rights over the Union Station tracks for $10 million in 2002. Aldridge VP David Tuchman told the Times that the first phase of the project has been “fully capitalized” by his firm and its investment partner, Leucadia National Corp.

A separate historic preservation plan is scheduled to be completed this summer; since federal funds will be involved in building Burnham Place, an environmental assessment also must be undertaken. Amtrak told the Times it is requesting a $400-million appropriation from Congress (spread over the next five years) to support the project.

Union Station currently services about 113,000 train riders each day, a number that is expected to double by 2033.

If the bold blueprint for Burnham Place materializes, those daily travelers in 2033 will have their blood stirred by magic conjured by a triumph of 21st-century civic planning.