The real estate industry is expected to remain on a sustainable course of solid growth for 2015 through 2017, according to a recently released three-year forecast from the Urban Land Institute (ULI) Center for Capital Markets and Real Estate. The outlook—the latest installment of the semi-annual ULI Real Estate Consensus Forecast—is based on a survey of 43 of the industry’s top economists and analysts representing 32 of the country’s leading real estate investment, advisory, and research firms and organizations. 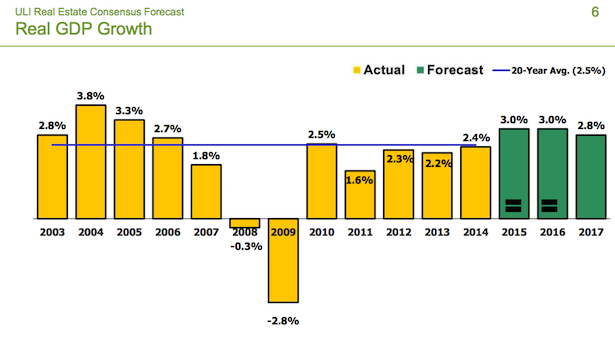 An analysis of the survey findings by ULI leader William Maher, director of North American strategy for LaSalle Investment Management in Baltimore, highlights areas of the industry and overall economy that are generating the most optimism for 2015 through 2017:

Mayer points to some areas of concern, including the likelihood of higher short-term rates squeezing investment returns and causing an increase in capitalization rates. For instance, respondents expect the NCREIF capitalization rate to rise steadily from 5.3 percent in 2015 to 5.9 percent by 2017, which is “consistent with higher interest rates and borrowing costs,” he notes.

Still, the findings suggest more reasons for hope than worry, he says. “In summary, almost all U.S. real estate participants would be very pleased if the future unfolded as predicted by the ULI consensus forecast,” Mayer says. “The forecast represents almost the perfect combination of strong economic and property market fundamentals, combined with an orderly wind-down of monetary stimulus.” Although the potential exists for progress to be hampered by obstacles such as economic downturns, foreign crises, interest rate spikes, or oversupplies, “real estate pros predict three more years of smooth sailing for U.S. real estate,” he says.

In general, the performance of most commercial property sectors, as measured by vacancy rates, rental rates, total returns, and product availability is expected to exceed or hold close to the 20-year (1995-2014) averages for each category. Key predictions by commercial property type:

This market survey is the seventh in a series of polls conducted by ULI to gauge sentiment among economists and analysts about the direction of the real estate industry. The next forecast is scheduled for release during October 2015.