CenturyLink CEO and President Glen F. Post III recently attended the completion of the company’s new Technology Center of Excellence in Monroe, LA. The Technology Center of Excellence—an expansion of CenturyLink’s existing corporate headquarters in Monroe—will help fulfill the company’s 2011 announcement of an 800-job headquarters expansion. These jobs, combined with a prior 350-job expansion announced in 2009, will contribute $67.7 million in new annual payroll by 2016, pushing CenturyLink’s statewide annual payroll in Louisiana beyond the $200 million mark. The company will then have 2,600 employees in the Monroe area. 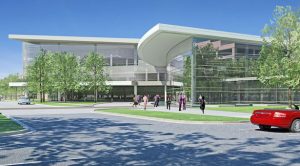 A global leader in cloud infrastructure and hosted IT solutions for business customers, CenturyLink is one of the top 10 economic drivers statewide in Louisiana’s private sector. The company completed its 2014 financial year with $18 billion in annual revenue and $772 million in net income.

By the end of 2014, the company had hired 530 of the 800 jobs announced with the headquarters expansion. In addition to the 800 new direct jobs, Louisiana Economic Development (LED) estimates the headquarters expansion will result in 1,170 new indirect jobs in the greater Monroe area, and the building project created an additional 350 construction jobs at peak activity. Employees have started moving into the new center.

At the opening, LA Gov. Bobby Jindal said, “Under the leadership of Glen Post, CenturyLink stands as a beacon for new companies looking to invest in our state and provide great new jobs for our talented workforce. CenturyLink, including its leadership and thousands of employees, represents an extraordinarily valuable Louisiana asset. We look forward to all they will accomplish through this new center and related innovations and growth at their corporate headquarters in Monroe.”

The CenturyLink Technology Center of Excellence includes a technology research and development lab, a network operations center, and collaborative office and meeting space. In the center, employees with network, cloud, information technology and other skills will work together to create innovative new products and services for CenturyLink’s customers.

“This marks an important milestone for CenturyLink and our North Louisiana community as we open the CenturyLink Technology Center of Excellence, a facility that will be a key in driving our company’s future growth,” Post said. “As CenturyLink transitions from a traditional network communications provider to a growing, integrated provider of advanced IP-enabled network, cloud, hosting and IT services, it will be increasingly important that we are able to attract the best talent in the world. We believe the Technology Center will help us accomplish this transition successfully.”

To secure the headquarters expansion, LED offered the company a customized incentive package, including a performance-based grant of $14.9 million toward the headquarters expansion, at a rate of $1 for every $2 spent by CenturyLink. LED also provided $1.2 million over four years to expand CenturyLink’s partnership with Louisiana Tech University, a higher education initiative initially announced with the prior expansion in 2009. Additionally, LED provided discounted space in the state-owned Accent Building in Monroe through 2015, which was to be used as needed, as swing space for CenturyLink staff during construction of the expanded headquarters facilities. CenturyLink also is expected to continue using the LED FastStart® program as well as LED’s Quality Jobs program. The company began construction of the new facility in May 2013. Site work, including a new north loop road on the corporate campus, began in late February 2013.

“This is another landmark event in the evolution of Monroe’s expanding economy,” Monroe Mayor Jamie Mayo said. “These new jobs and the partnership opportunities CenturyLink continues to create have made Monroe a destination for 21st century job seekers. We are very proud of CenturyLink CEO Glen Post and his team for their visionary leadership, which is enhancing this company, our city and the communications industry.”

For the new center, CenturyLink is pursuing LEED certification in the U.S. Green Building Council’s Leadership in Energy and Environmental Design rating system, which recognizes buildings that reach a high degree of environmental performance in such categories as water efficiency, energy use, materials and resources, innovation and design, indoor environmental quality, and site sustainability.

As a testament to CenturyLink’s success in Monroe, major global companies have identified Monroe as a prime location for their new investments. In February 2015, IBM announced it would establish a 400-job Application Development and Innovation Center in Monroe, which will serve as the anchor of an 88-acre, CenturyLink-affiliated technology park and mixed-use development.